Winter is a coming!

The second weekend in October brought cold winds and rain. SONFLOWER sheltered under Tom Rolt Bridge for Banbury Canal Day which was a washout. Not quite such a washout was the concurrent Banbury Folk Festival which took cover in General Foods club and provided lively folk performances with the advantages of dry surroundings and good beer.

Upstairs Fairport Convention was the star Act on Saturday night and they were very ably supported on Friday by Tradaarr and on Sunday by The Gerry Colvin band. There was also better beer with Hook Norton Brewery's "Old Hooky" on offer.

After removing the banner and bunting on Sunday evening the wind settled down a bit and the rain abated to a drizzle. So two hours of Monday morning were spent returning Sonflower to her home mooring via Calthorpe Winding Hole. I hope no-one was looking because I really fouled up the turn and stemmed SONFLOWER on the far side of the Winding hole. No damage done I returned to home mooring without incident.

Most of the boats from Canal Day were on the move including a volunteer crew on the CRT workboat that had dragged the town centre length of the canal and exhibited the bikes and trolleys pulled out this year. I did not have to operate the lift bridge in either direction and had help at the lock both ways too.

Now it is time for an engine service, Autumn touch up and winterisation.
2miles, 2 locks, 2LB, 2 hours

It is only 5 days cruising to get from Fazeley Junction on the Coventry Canal to Marsh Footbridge 163 on the South Oxford Canal. But for us this season it took us 16 days!

We left immediately after the Boaters Christian Fellowship Weekend at St Paul's Fazeley making a short detour to the Fazeley Mill Marina for a necessary pump out. We turned at the Junction. By emerging from the Watling Street bridge we totally confused a hire crew who were hoping to pull into the already occupied water point opposite the junction. I made the turn and they stemmed their boat under the  Junction Bridge 77. We managed to get behind them and disappear back into Watling Street bridge. Pump out was easy. The lady of the Marina helping with a token for the machine and with operating the equipment.

So off to Watling Street Bridge again and a simple turn at the junction and uneventful cruise to Polesworth where we got the last space on the visitor moorings. The Best Mate and SueperCrew knocked up a meal. We were still full from Sunday Carvery dinner at the Fazeley Inn so a small meal was in order.

The next day we started early and headed for Atherstone Locks. Here we met our BCF colleague Who volunteers there. He advised us to get in touch with another memebr who has a moring near Bulkington Lane Bridge 14 in Bedworth. We di call but he was away. I left the boat in the hands of the Best Mate at Nuneaton and got a buses back to Fazeley where we had left SueperCrew's car. I drove it to Bulkington Lane and met them just after they had moored up in a lovely spot, a quarter of a mile from the bridge.

(Over the previous weekend I had heard from my sister that my aunt was seriously ill in Liverpool. I made a trip up there on Tuesday so our cruise was interrupted.)

We  had friends staying with us for a week. We have known them since 1980 so we can ask a favour every now and then. They were going up to Leicester for the day so as Bedworth and Newbold are "on the way". I schemed that this little cruise could be done while they were visiting! They dropped me in Bedworth at about 10.15. A short walk to the boat and then prepared her to go.

I had a lttle problem engaging forward drive so checked the ATF level in the gearbox and put a bit more in just in case. I dribbled sme doen into the engine bay so had to mop it up with a rag held in a litter picker. The litter picker broke and the rag dropped into the bilge. A repair of the litter picker was effected and I used iot to retrieve the rag, mop up the spill and try the drive again. A little more success and we were on our way!

The remainder of the cruise was uneventful. I had the help of a volunteer at Sutton Stop lock and just drove on from there.

Two friends came with me to Hillmorton in the car and then by Bus to Newbold. We bought fish and chips at Fishsmiths on the High Street. It was excellent. Mini fish and chips was plenty for us. Then we cruised for a little over three hours. One of my crew had never been on my boat when moving so that was a first and the other had never driven into a lock so I gave him his debut too!  There were two CRT volunteers at Hillmorton Locks so we had help here too.

Our friends left on Sunday after lunch. The Best Mate was still feeling unwell and we needed teh boat back to Banbury for Canal Day next weekend!

I took the difficult decision to go and do it alone. I drove to Hillmorton and stocked up with steak pie and beer at the Co-op. Single handing can be difficult for eating and sustenance that is easily consumed at the tiller is essential.

I cruised until dark on Sunday evening almist getting to Bridge 80 on the North Oxford. The next morning (Monday) I left at 0600 as first light showed in order to get to Napton when the licks opened. I thought that was 0900h. Wrong! 10.00am and there was a boat already ahead of me when I got to the Sanitary station. I cut some kindling while I waited.   The later start up Napton locks meant that achieving Claydon locks the same day was impossible as they closed at 3pm. Another delay occurred when my centre rope flipped a windlass into the cut just before lock 10. 20 minutes of magnet fishing later I had lost my place to another boat. There was no hurry so I stopped at the top lock moorings and had lunch and re-filled the stern gland greaser.

I achieved Fenny Compton Wharf moorings to find a shiny 50 foot boat in the middle of a 120ft mooring. They were just starting to eat dinner so I told them not to bother moving and backed through Bridges 137 and 137A to a mooring a couple of boats back on the 14 days. Steak and Ale pie and Otter Pale Ale called from the Wharf Inn. 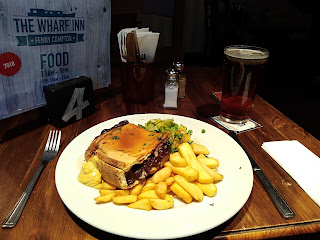 There was also some good conversation with the crew of Corinthian  heading for Cropredy Marina. They were interested in where I moored "on-line" as this was a cheaper option that they had not considered.

Early in the morning I filled with water beside the Inn and then cruised very slowly to Claydon Locks. Here I was second in the queue again. The first boat up Napton the previous day had missed the closure by 15 minutes. To do that he must have been motoring! Nick says it should take 6.5 hours so they made up an hour on that time! The boat name was Sloe Roaming! Nothing Slow there. He had a reason for his haste. His crew was a teacher due in class in Basingstoke the next morning. They needed to get her to a station. Banbury was the target. I edged past the boat and nestled against the lock entry to repair my button chain. A shackle had sheared apart. I then returned to my olkace in the queue. There was a boat moored on the lock landing. No evidence of life apart from empty wine and spirit bottles. I guess he was "sleeping it off."

So onward and downward filling the first two locks but having a boat come up the third. The fourth Claydon lock was set against me with the bottim gates left open for an approaching craft. However, the craft was not approaching! It was Dusty the coal boat who was filling a boat with diesel between locks. I phoned them to ask if they would be long. "That depends on whether he has an hole in his tank" came the reply. I closed the gates, filled the lock, worked down and was in time to moor behind the now replenished craft for my turn to be filled! 136 litres of diesel and two bags of coal later I was on my way again.

Just after Broadmoor lock I was waved down by a good friend who came aboard to help me through Criopredy lock. She was heading for Banbury Library to do some research and had asked if she could use a parking space at our place. No problem as I was out boating. So she came to give me a helping hand.

I passed Sloe Roaming again on Cropredy 14 day moorings. They stopped for lunch! Such luxury.  They caught me up at Bourton Lock and then came past me as I moored up at Home Mooring.

All that I needed to do was get two buses (or as it turned out a bus and a taxi) back to Hillmorton to collect my car.