Calvert came to town today and the Best Mate spotted her outside the club. We went to visit Terry and Maureen to welcome them to Banbury with traditional gifts of cake and ale. They showed us around their recently acquired and lovingly updated boat.

I have never been in a more traditional boat. From the immaculate Russell Newberry in its hingin 'ole, complete with pijin box and cross bed that folds out of the bed 'ole, to the fold down desk, food cupboard and even a ticket drawer. Margaret is crosherin 'er own lacey daceys and all through the boat are lovely hornamentals.

But the boat is also extremely modern and Terry showed me his modified light fitting with bang oop to date LED bulbs. These were supplied by Bedazzled and I can't wait to see them at Crick. They seem the solution to anyone who has lights as the main drain on the batteries, after starting the hingin that is.

By the way, spelling in this post is inspired by "Ramlin Rose", Sheila Stewart's fantastic book about traditional life on the cut
Posted by eeyore at 20:15 No comments:

We have just had a wonderful time here in Banbury. We hosted a day out for the Boaters Christian Fellowship South Eastern Region. We had a very good day with excellent weather.

So many boaters come to Banbury and moor at Castle Quay or other town centre mooring and visit one of the many eating places in the town, do some shopping in the many national chain shops or sample some of the local ale and then move on. Not many, it seemed to me, appreciate the history of the town, steeped as it is in heritage. It has changed daily over the two thousand years of its history and the settlement of people in the iron age at what was the crossroads of Britain.

Many would put other places as the 'the middle of England'. Being as far from the sea as you can get is claimed by several villages around. Not many of them have developed like Banbury has. In 2001 it was the fastest growing conurbation in the country reputedly creating more jobs than there were applicants to fill them. Now, we have a new population joining in from all over Europe, the middle East and Asia.

We walked around the town and saw the remnants of the architecture of times past. Demolition of the old and its replacement by the new has been the way for Banbury since the seventeenth century when the castle was demolished to provide stone for re-building a war ravaged town. The St Mary's church half fell down and was half blown up in 1797 to be replaced by the present building and another fine church was demolished as late as the 1960s. The town to the south of the bridge was flattened about the same time and new apartments have risen from the rubble. Town centre churches have become shops and schools have become Estate Agencies and offices. The present Town Hall replaced another close to "Old Town Hall Wharf which is now a residential development squeezed between printing words and a car wash.

We all now appreciate the canalside developments with the dichotemy of eighteenth century Tooley's Boatyard and Dry Dock over shadowed by the 21st century Museum Bridge.

The 48 iron mongers referred to in Tom Rolt's "Narrowboat" have all gone now; the 28 inns, some referenced in Sheila Stewarts "Ramlin Rose", are under pressure; the five breweries that were the second largest employer in 1900 have all gone; there are none of the eight wharf businesses and three basins; no timber yards or saw mills, no textile or woollen mills;no malthouses; the corn mill is an Arts Centre and there is only one of the three huge foundries left. It all adds up to a huge amount of change.

Banbury is more than the destination of a nursery rhyme horse woman. It is more than a view of the cross and a visit to McDonalds. When you come to this crossroads of Britain, stay a while and appreciate a town changed by the coming of the canal, deeply affected by the demise of freight traffic on it but responding to the new challenge of the slow leisure traffic on the canal and the rush of life fuelled by the M40.
Posted by eeyore at 08:04 No comments:

We have just left the boat at Kate Boats for a bit of re-fitting. We took a while to get her there and have used this week without her to visit family in Kent, staying at the Maidstone Hilton.

I got to thinking about the hotel boats that we past moored just by Chambers Bridge No 100 doing a last minute clean up before starting the summer season. 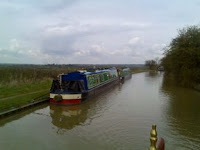 But Granny Buttons has got in there first! The boats are Lady Selena and Lady Margaret of Ladyline Hotel Boats. I spoke to the owners and they look lovely, the boats I mean as well as the owners. Both boats are powered because it gives better flexibility and speed at locks. Also the resale value of a butty is very little apparently and the Hotel Boat trade is rather precarious. Awayforawhile has had difficulties recently to say the least. They had a pair of their boats (Rose and Castle??)up for sale for quite a while.

Ladyline do run as a pair though, the following boat depending on the view of the first at Wygrams Turn and inaudibly sounding her horn! No harm done as we cruise at under 2mph!

I do wish them all the best with their enterprise. Believe it or not, I like to see people making a go of a business on the canals
Posted by eeyore at 22:26 No comments:

Today I left Sonflower at the marina, where she will be for over two weeks. We are having a sofa and bookcases and a cabinet fitted into the saloon. This will make it more comfortable as a cruising boat. The project will also give us more locker space to store the clutter that accumulates on the boat in a tidier fashion.

The previous owner of the boat had her extended by twelve feet. The extension has never been fully fitted out. The tongue and groove pine is beautiful but there has been no permanent furniture. Whilst this flexibility is good in some respects, we found that the clutter creeps to cover all the space available. By putting in seats with storage under we will be forced to keep only what we really need.

Much of the boat's woodwork is glued to the structure with 'no more nails' or its predecessor. Much of this is coming to the end of its useful life and so the carpenters are going to remove much of the lining at the rear of the boat and re-fix it in a more satisfactory manner. We also are having new hardwood doors as the rear doors and frame are rotten.

We have also asked for a feasibility study and quotation to fit a calorifier for the bathroom. More about that later. The boat has only a gas water heater at present and the use of engine waste heat for water heating has to be the green way forward. It may legitimately allow us to self certificate diesel used for heating rather than propulsion to save tax.

The engine is also being fully serviced.

All in all we hope this will fit us well for the summer.

As we cruise we will be planning other aspects of a re-fit to make her grandchild friendly as well!
Posted by eeyore at 23:00 No comments:

Meet at the Bridge

Bridge 100 on the widened section of the Oxford/Grand Union Canal between Napton and Braunston is a neglected location. Nick Atty says "a motley collection of boats collect here".

This last week we have been on a cruise to take the boat to Stockton Marina to have some work done. A diversion to Braunston was planned to have breakfast at "The Gongoozlers Rest" (opening hours Wed to Sat 0900-1500h.}

We moored just before Bridge 100 on the piling as there was a cloud in the sky, we were fifteen hours early for breakfast and we needed to stop. It was about 4.30 in the afternoon. There is a wonderful view from here over the Warwickshire farmland.

The next morning we set off for Braunston for breakfast. Under the bridge I could see a Wyvern Hire Boat moored on the stone embankment As we passed it, I was shouted at. I wasn't going too fast. It was friends of ours, Brian and Elizabeth with their two daughters. They were moored 200 yards from us but we were separated by the bridge 100.

Of course I stopped and came alongside and we chatted for a while. They expected to be in Banbury for Friday so we met there this evening and had a lovely evening dinner with them and caught up with all the news.

To think all that separated us that evening was that neglected Bridge 100.

I wonder how many other times that bridge has kept people apart rather that joined them!

[Breakfast for four was enough food for the whole day at three pound fifty a head! Full english is four pounds eighty for egg, bacon, baked beans, tomatoes, fried potatoes fried bread, mushrooms, black pudding, two slices of bread and butter,and a cup of tea or coffee.]
Posted by eeyore at 22:17 No comments: