Birmingham in the Rain

Thanks to the Best Mate who was undertook nonagenarian caring duties Alex and I went to take the boat to Birmingham City Centre. 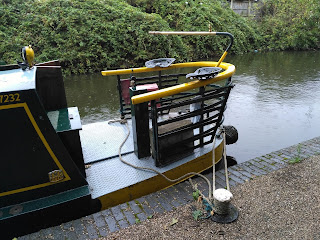 This was how we found her tied up. Obviously we had been untied at the stern and someone had retied her with both my stern lines and as many knots as they could tie around the bollard and the swan neck as well as the tee posts! Thank you to the kind hearted soul who pulled her in.

A retired vicar conversed with us for a few minutes, prompted by the WWC  labels in the windows. He told us there was a lot of traffic coming out if Birmingham.  "Good, I replied, that will help us"

We left in rain. I had Alex on board as crew and enjoyed his company. About a half hour into the cruise we came across steaming narrowboat tug Laplander. Murphy's Law applies and she was under the factory over the canal when we passed so I could not get a pretty picture 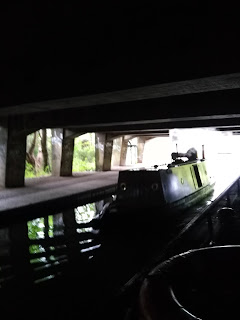 Thence to Salford Junction, the spaghetti junction of the waterways. I always have to ask myself which way we need to turn. 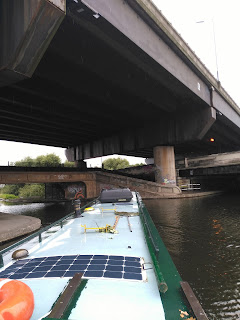 The real "spaghetti junction" (A38(M) and M6 intersection) is about half a mile further on but that is the M6 above us. Passing Cookoo Wharf we said "hello" to the crew of nb Norfolk Belle who we expect to see at Banbury Canal Day next weekend. Aston locks were all set for us and we met a couple of boats coming out of Birmingham. The rain persisted.

We met nb Kew at the foot of Farmers Bridge locks and took our lunch on board. They were returning from Parkhead Festival and had a milk bottle of bitter real ale on board, bought at discount from the closing bar. It refreshed me. The WWC for central Birmingham was their lock wheeling crew down Farmers Bridge flight and we took him with us to re-tread his steps as he needed to get to an appointment elsewhere later in the day. After the first of the FB locks I felt guilty having so many hands and sent Alex back to nb Kew to replace him. The rain stopped once we were under the shelter of the buildings that cover the secretive flight of 13 locks that form the staircase to the highly developed central Birmingham exhibition quarter.

This is the iconic view to remember Farmers Bridge by with the  Telecoms tower in the background. 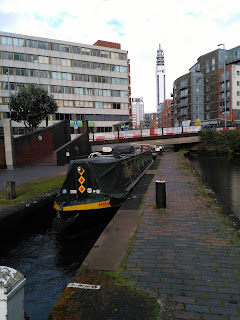 My crew had to leave me to do the last three locks on my own but as they were set ready by Kew's descent he opened the bottom gates of the last two for me as he passed. I arrived at the top and backed into a mooring in Cambrian Wharf at about 5pm. 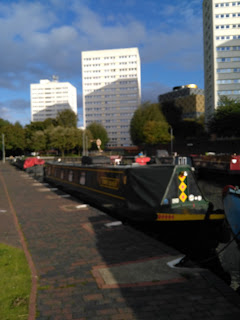 This is the first time I have had every lock on Aston and Farmers Bridge Flights (24 locks) in our favour. Indeed a good road today.

Now I had to consult Traveline and check out buses. I followed their map and route to Bus Stop CS1 on Corporation Street and got a 63 bus to Erdington where the car was parked. Under and hour later I was ready to rendezvous again with nb Kew and Alex. 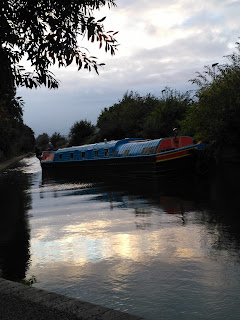 Here Kew positions herself across the canal to moor near the Tyburn pub where we enjoyed a dinner together with her crew before we left to return to Banbury.

We have to admit it. 21 minus 4 equals 17 so we have been, prima facie, overstaying!  My sister did not arrive until Saturday and with other commitments, including a son's birthday and another's time to return to uni, we had no earlier window to make this move. I consider this reasonable under the terms of  SXVII 3 c (iii) of British Waterways Act 1995.

We said fare well to our friends' garden mooring early this morning (Sorry to disturb you!) and plied our way past the maturing Kingsbury Water Park with their varied habitats for various species of bird and mammal. We could see goose pond and swan lake. We heard the raucous alarm calling of coots on their preferred patch of water and saw the little isles that terns colonize in the spring and early summer. The Summer visitors that probably inhabited the reed and brush have gone now, leaving the willow and hawthorn to perhaps a wintering shrike or hawfinches. The sand has been taken and one conveyor bridge has gone too. I could not see any remaining sand cliff to attract sand martins but who knows what is out there. Most pits are water filled now.

After the sands of the Thame valley we come to the rise out of it up Curdworth Locks, 11 in all. We didn't have to empty any of them! The first boat to meet us was nb Mad Hatter, who are members of our fellowship. They are doing the Warwick ring to finish off their summer cruising, as you do.

We have been this way before: in the opposite direction on our very first waterways holiday in 1999 and several other times too. I love the peace on the water and in the fields when only a couple of hundred yards from the morning madness of the M42.

There will be more noisy interruptions to the peace of the waterway when HS2 roars over lock 8!
We had a slight delay at one lock where CRT had a work team sprucing it up a bit. 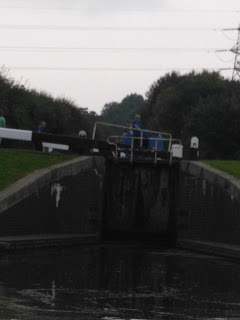 They soon gave way to us and moved on to the next lock. Waiting for them to clear the way gave an ideal time for a bacon roll and a cup of coffee. We followed the work boat through Curdworth Tunnel and they pulled over to let us pass.

Minworth locks are protected by antivandal devices which sent us scurrying into the boat for a "handcuff key". I am not sure that these are effective but certainly inconvenienced us! The top lock at Minworth also had workmen in attendance. This time a contractor sealing behind the brickwork to stop sidewall leakage. After the bottom lock we looked for a mooring. The towpath refurb has provided lovely concrete coping stones and all weather surface but it is not suitable for driving a mooring pin into . Not boat friendly as they say! So we had to continue to the black and white bollards just south of Butler's Bridge (A38 Kingsbury Road).

From there a long walk to the 110 bus for the ride back to Fazeley and the car! Home to a take away tandoori!

This was to be closer to Tolson's Footbridge which gives access to St Paul's Church, Fazeley where the Boaters Christian Fellowship were holding a short weekend gathering. It included a session to examine one of the Fellowship's main aims: fellowship!  One would have thought we would have had that one sorted out but we gained a lot of insight into what different members might want in the way of meeting together and enjoying all that we have in common. Our weekend included sharing food together in various ways: a great way to experience fellowship. We had a picnic lunch, a barbeque supper, a communion service and Sunday Roast lunch in the Three Tuns. With a do-it-yourself entertainment in the evening when The Best Mate sang to my guitar accompaniment, it was a good weekend.

And this afternoon we crossed to the canal to moor on a garden mooring. Approximately 50 yards!