11 June 2018 We drove to Cape of Good Hope and parked in the side road there. There was now only one lonely boat on the Cape Visitor Moorings and 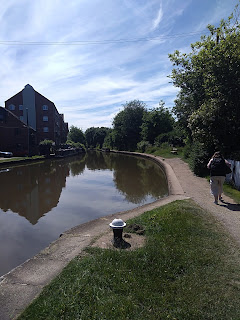 at 1530ish we  reversed it to the water point to wash the "other" side of the boat. I was hoping that someone would ascend Cape locks and partner us up Hatton Flight. No such luck and we started the flight with hope in our hearts as the bottom lock was empty set for us. Sonflower eagerly entered and ascended. The second was full;  the third was empty and the fourth was full! How does that happen? After that the only assistance we had was crossing with an American hire crew from North Carolina with a baby in a pushchair. They wanted to leave two gates open as they were using the full width of the wide locks for their narrowboat! "Which gate do you want left open?" a crew member called across to me. "The one I'm standing beside", I said. Beside another lock an Australian grandfather was explaining to his granddaughter how the locks work. "How many turns of the windlass do you think we do on this flight?" I asked. She looked puzzled. I told her each paddle needed 21 or 22 turns to open and close it. That is over 1,800 turns on the flight. No wonder some boaters let the paddles drop on their own! Why are the last four locks of Hatton Flight so much harder than the others?

After the top lock the Best Mate was released from the tiller to get a meal prepared and I sought a mooring. We moored on pins, on the wrong sort of piling after White Bridge 61. Some hirers were enjoying a barbeque down the towpath and I tucked into a plate of Indian snacks  with Cumberland Pale Ale.    6 miles, 21 locks, 5.3/4hrs


12 June 2018 We pulled pins at 0630 after a good and peaceful night. No-one else was on the move but we saw a couple of dog walkers as we approached the Lapworth Junction.  Turning left toward Stratford was a completely new experience for us. We have passed Lapworth Junction numerous times and for various reasons refused the offer of  34 locks in 13miles.


Now we were looking forward to it. A greyhound walker with much local knowledge told me about bottom gates that lean back and are hard to open, "like this one". I had no difficulty which left me full of confidence for the rest of the day.  With many locks close together and others not more than half a mile apart the biggest decision was whether to walk to the next one or get back on the boat. I walked most of the way and the Best Mate poodled along until we got to lock 33. Here a single handed continuously cruising journeyman was leaving the lock. He warned us that the pound after the akkiduck was very low and he with 24 inch draft was bumping along the bottom. 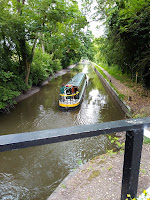 Sonflower stuck in the exit of the lock first and we let water down to flush her through. Then she stuck in the pound. No panic from the Best Mate. I let more water down until the pound above was about 6 inches below cill level on the bywash. I dare go no further as the akkiduck would have limited depth. We entered lock 35.

The next little problem was veg again.This time an uncleared fallen tree that blocked the towpath. Again, dog walkers to the rescue dragging it aside to allow some access to the next lock. 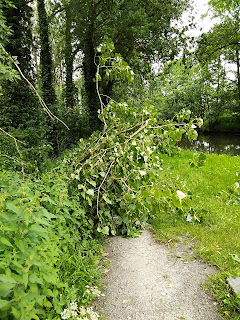 The real fun started at Lock 36 where there was a narrowboat stuck in the lock exit. 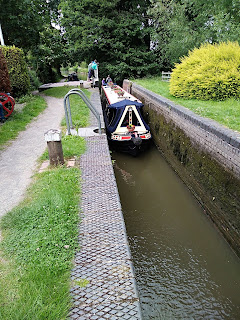 Here flushing through made no difference. Checking the bywash cill levels revealed plenty of water in the lower pound. The boat was a Tyler Wilson with a known 24inch draft. So what was the problem? We ummed and arhed and the following boat crew who are members of our cruising club joined in too.  Then it was decided that as the navigation was closed CRT should be informed.We were told a team was on its way and another was adjusting the levels I had reported amiss at lock 34/35! I got out the beer, glasses and waited.  Keith and two heavies arrived and they leaned knowledgeably on the gate and asked the skipper to reverse as we pulled the gate in the opposite direction. NB Escapologist immediately released. Keith then part closed the gate and went in with a large scoop on a long handle, scooping up shells and fresh water mussels. These accumulate behind the gate and prevent the bottom opening enough to let the boat through. The pinch was well below the water line and invisible to us.

The remainder of the cruise was uneventful and we arrived at a lovely mooring above Wootton Wowen Bridge to have a relaxing afternoon. I went for a short walk to the local farm shop while the Best Mate rested  her leg on the daybed and read a book. 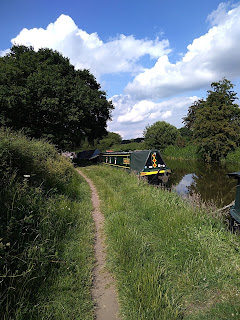 We went to the  Navigation Inn on the recommendation of a local long term moorer. This is a really good value for money pub. Only 200 years of experience. I had a pint of Old Goat Ale, a CAMRA champion ale for 2017. It was nice and fruity. Other ales on offer were Eagle (available at my home local) and the ubiquitous Old Speckled Hen which is a bit strong for an evening meal accompaniment.

After a good nights sleep we walked to the Parish Church of St Peter and enjoyed a visit there before we boarded the bus to Stratford on Avon, then another bus to Warwick bus station where our third bus was waiting to take us to the Cape. We then drove back to Banbury well in time for our regular Wednesday lunch date with our ASD son.  7.5 miles, 17 locks, 8 hours