What is a narrow boat?

I just had a terrible thought. Some of you bloggers out there in the world wide web may not know what a narrowboat is or why it is called that. You can see from the pic that SONFLOWER is 17.1M long but only 2M wide! When the canals in the UK were built about 200 years ago most canals were narrow; the locks were built a little over 2m (7ft) wide and 22m (72ft) long. This conserved water which was very important to the canal designers of the day. Hence, today's cruising pleasure craft are still need to be narrow to be able to navigate the majority of the UK canals.

These pretty craft do find themselves on other waterways worldwide. There is a narrowboat at the moment making a voyage down the eastern seaboard of the USA. We have just returned from a trip to the Shannon in Ireland where we saw a couple of narrow boats on Loch Derg and we have navigated the Canal du Midi in southern France on a narrowboat.

However, being flat bottomed and of slight draft (approx 2ft) they have the sea going characteristics of a bath tub with the plug out. I have seen a seaworthy narrowboat but they are very few and far between.
Posted by eeyore at 20:21 No comments: 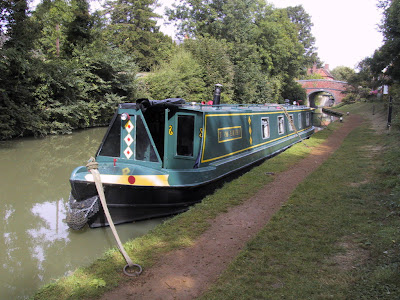 Here is a picture of SONFLOWER

She is moored on the very pretty South Oxford Canal.

Here she is at Cropredy.

Just started! I have just returned from the mooring where I have been enjoying one of the pleasures of being a boat owner. YES! I have been cleaning out the oily bilge. Having suffered a minor diesel spillage/leak on my 44 year old BMC 1500, I have had to quarantine the effluent within the engine compartment in case some of the nasty stuff got into the canal and spread it's rainbow patterns across and down the pound. It really is remarkable how far a tiny bit of diesel will go. So this afternoon was a nice time to enjoy the April sunshine, admire the daffs and narcissi in the hedgerow and drown out the birdsong with the genny and the aquavac. Four pairs of rubber gloves and a lot of stretching and careful pouring and a 25 litre drum was full of oily watery waste, the bilge was dry and washed with detergent and a new absorbent mat fitted to mop up any future drips. What satisfaction!

Of course, after the winter of neglect there are many other jobs that have become urgent before the cruising season can get under way. The Traveller toilet has got loose from the tank. Another pleasant job to tackle. A couple of windows show signs of leakage and need taking out and refitting, cobwebs abound. Where do all those spiders come from? And of course, the batteries are flat!

Maybe I should be joining the huge number of hirers who failed to get round the bend without scraping along my gunwhales. They don't have to worry about all these nice little jobs before they get going on a sunny spring cruise!

There. All the boater's conversational topics catered for in one post-engines, batteries and toilets.
Posted by eeyore at 17:27 No comments: