Last of the Year

A break in the rainy weather this morning.

We were moored in town for the Festive Season. Needing fresh water we had too much flowing past us, in the bilge and falling from the skies so SONFLOWER lay lonely beside the quay. The bilge was pumped out.

At 1000h the lift bridge was raised and I went through to the water point. Another local moorer had descended the lock to the facilities below and left the bottom lock gates open. He probably thought they were on their own in the Sunday sunshine. I couldn't be bothered to close them and fill the lock, only to have to do it all again when I returned from turning, so I backed through the lift bridge and all the way back to home mooring. I arrived at 12 noon. Regular readers will note that this is the average time for a "Water Run" whichever way you do it.

Back on the mooring I was just in time for coffee on board Willy Nilly where I savoured the bacon, eggs, sausages, mushrooms, beans and toast that were being prepared for the crew. I was offered some but regretfully refused so as not to spoil my appetite for the paella that I was to cook for Sunday lunch. The smell was good and the conversation flowed. The boat's dog enjoyed a sausage and eyed up the baked beans.

I had to take my leave a little under an hour later to get away to cook for my own crew but stopped to chat to the boatman on Grace who was chopping oak logs. He told me that he had not bought any logs in the seven years he had been on the water. He only burns logs too! He was extremely accurate with the axe he was wielding which he put down to the fact that he had been chopping wood since he was seven! He was thankful to be on our relatively sheltered stretch of water during the rainy spell. His home mooring is at Welford on the Warwickshire Avon. He told me his story of survival during the 2007 rise in water levels of over 16 feet overnight! He managed to secure a single rope to the overhanging branch of a tree just before the rings came off the poles to which he was moored. Less fortunate boats were swept by dragging their mooring lines!

The paella was good and used up some more of the Christmas turkey!

Don't you hate it

when you just click in the wrong place and your whole blog roll disappears!

Sorry bloggers. It may take some time for things to be put right.

Happy Christmas to all of you!

That was what was forecast so when I woke I looked out, saw the sun and started the engine.

I made the best of it while it lasted:
0745 Let go
0800 Through Lift Bridge 164 thence through Banbury Lock 24
0830 Turning at Bankside (Tramway) Winding Hole
0900 On the Services Point for ash/rubbish disposal, water and pump out
1030 Prep the lock and work up (encourage "crew" to shower and dress)
1045 Through the lift bridge, coaching a young woman who was waiting on her way to work, to close it for me, Thank You. Saved her and me time!
1100 Turning at Grimsbury Arm (encourage "crew" to have breakfast)
1115 Tie up at Home Mooring
1130 Rain commences, and Bright Period over!

A clearer sky and a colder canal. The ice broken by a passing craft yesterday is completely reformed this morning. 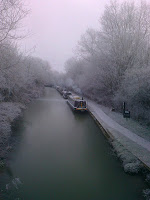 This was how cold it was this morning!

Highlight today was seeing 25 waxwings in a tree near here. They flew off south. Cold weather has its compensations. Beautiful, truly beautiful birds.
Posted by eeyore at 21:37 No comments:

Just the water run to do today.

I let go (note the new, correct, boating terminology used since reading "The Amateur Boatwoman" which was kindly lent to me by Mortimer Bones) at 7.50am and was at the Lift Bridge at 8am. Piglet popped up to work the bridge on his way to the Station to catch his train to Oxford, where he rehearses with the Kent Youth Orchestra. I settled onto the water point.

Tigger's alarm sounds at 8am and I was happily surprised to find that he had silenced it AND got up. I shepherded him into the shower while we filled with water. He duly dressed and settled at the table for his breakfast as I worked down the lock. I tied up below the lock and let him off as it was time for him to leave for football training.

I let go again and winded at Tramway, passing nb Annie who was busy unloading a ton of kiln dried oak logs that had just been delivered to the parking layby near Samuelson (Tramway) Bridge. 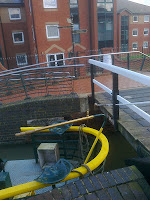 (A little close to the bridge here as the flow is toward the lock and hence the bridge!)to return to the mooring, tying up at 1050. nb Willy Nilly was also preparing for the cold, sawing logs as I passed.

The felled trees on the opposite
bank do look inviting!
Posted by eeyore at 12:20 No comments:

Those of you with a long memory will know that in September I posted to let you know that I wrote to Canal and River Trust about this issue.

Today I got a reply.

The reply was written yesterday, 59 working days after the date of my letter.

Apart from confirming the facts the reply did not address my concerns at all.

I have asked, for the second time, for the complaint to be elevated to "the second level". 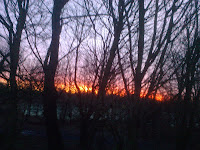 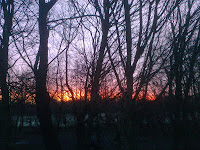 I waited patiently for the sun to appear. I expected a large red disc to slowly ascend into the sky, yellowing as it progressed in a long lazy arc.

I anticipated a gorgeous bright but crispy cold day.

Actually the sun never shone. The clouds were already gathering on the eastern horizon and the sun has been masked from sight.

Cold it is though.

We had the first ice of the winter on the Canal this morning.

If it clears during the day I may go down to town for water. A long freeze would be a little inconvenient!

The warning this time is for a cold snap I think rather than a storm or rain. But who knows. 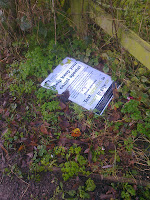 These A3 size posters have been appearing all over the place attached to all sorts of street furniture, trees etc. This one was attached to the park boundary fence near to Marsh Footbridge No 163.

However, it very quickly became just another piece of litter. This time plasticized and non biodegradable! Hardly keeping the canal special!

Don't worry! I got my screwdriver and hammer out, removed the old tacks and re-affixed the poster.

Does that mean I have now become one of Canal and River Trust's team of volunteers?

Links to this post
Labels: Canal and River Trust, Volunteer

To be quite honest I have been too busy to blog.

The Best Mate has not been well and has had to take to her bed. That has meant that a lot of the things that would be easier with two have been handled with my two hands. Just keeping the cupboards full, the crew fed, the fire alight and making sure that the crew are in the right place at the right time takes a lot of effort.

We have done everything we have needed to do. Firstly, once navigation re-opened and water levels were sensible again, 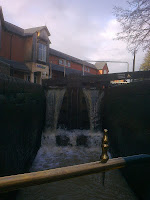 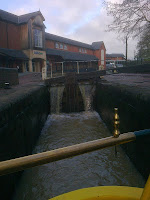 we went down the lock and got water and pumped out the toilet tank on Tuesday. Once above the lock again I waited for Tooley's to tighten up the leaking diesel joint again and we settled for life in town for a couple of nights.

While there, on Friday morning, Dusty came 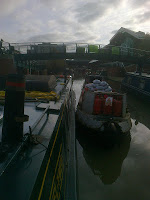 and topped up our supplies of coal. I had already made sure that I had a spare gas bottle and had been surviving on a single 20kg bag of Homefire Ovals and a bag of logs that I had bought at a farm shop. Buying coal this way is 25% more costly than off Dusty! He had the news that coal prices rise again by 25p per bag next month on top of a 25p rise this last two months.

So Saturday morning I returned to home mooring.
Posted by eeyore at 13:51 2 comments: