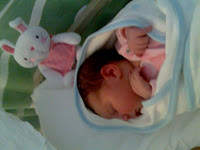 Sonflower lies neglected on her mooring.

The whole of the half term holiday has passed and she hasn't been anywhere at all.

However, we have been places. You know, people to see , things to do!

The first reason to go traveling is pictured above. This bundle of peacefulness is EliG (Elizabeth Grace). Our youngest grandchild and first grandaughter. So we had to go and visit her parents and have a cuddle of her! She is about two weeks old now and growing fast! Her Mum and Dad are doing well and enjoying the wonder of parenthood. 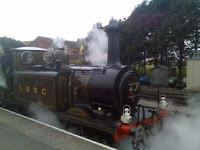 The second reason to go traveling was to make a visit to Minehead. This was to stay at one of the most interesting training hotels in the country, Foxes Hotel and it coincided with a steam festival weekend on the West Somerset Railway. So we had a ride on the steam trains and a vintage bus and visited their museum, Dunster Castle, Medieval Village and Water Mill and enjoyed a lovely weekend.

Returning today wasn't fun. It rained most of the way but we did see a perfect rainbow!

It is good to go traveling but it's so much nicer to come home.
Posted by eeyore at 23:12 No comments:

We have been so busy this last two weeks. With the Canal Day last weekend and the Canalside Folk Festival this we have been a little pre-occupied.

But all of us are shocked about the latest news of the death on Tuesday of Maurice Batts of nb Tina. The newspapers described him as a 64 year old gentleman. That is a truly wonderful description. Along this part of the canal he was well known for his visits to the town from Grimsbury Wharf, to get water and then moor just below the footbridge to take a few moments in town to quench his thirst with a pint or two. He was always ready to pass the time of day and deserves the title "Gentleman"

Our sympathy and prayers are with his family at this dreadful time.
Posted by eeyore at 18:46 2 comments:

Links to this post
Labels: Murder on the Canal, sympathy

O what a lovely day 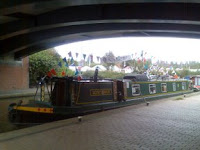 Here is nb Sonflower all dressed up on the morning of Banbury Canal Day. This is a festival for the town with markets, entertainers, boats and so much more.

Getting there wasn't such a problem. We only had to turn the boat around and head about a quarter of a mile to the town centre. We did this last Friday evening to be there well ahead. The Day itself is on the Sunday. We needed Saturday to clean up a bit so that we could receive visitors. So Saturday was spent cleaning her inside and out, polishing the brass and then rigging up the bunting.

We were moored under the Tom Rolt bridge. This spot had been specially selected by the Vicar of Banbury because we were to be the backdrop for the Christian worship service in the afternoon. The amplification needed power (my generator) and last year (2006) it had bucketed with rain all afternoon so the bridge would provide shelter for the faithfull should lightning strike twice.

We were representing Boaters Christian Fellowship alongside the crew of n.b. Scyeffe who was moored next to us. The vicar's boat, Noah's Ark was also in town but a little bit farther away. Our purpose for the day was to welcome people on board. Over 5000 people expected to turn up to the day and many of them have never been on a boat. What they expect to find inside I have no idea but they seem surprised to find most of the things they have at home! Like beds and a table and chairs and a cooker and a fridge. We have no television so this might confirm to them that we are a bit strange!

All in all we made teas for a good number and showed scores through the boat. It is a great time just to be able to chat with people about boats, boating and living aboard, and showing that as Boating Christians we are nearly normal.

Alex also had fun with the passing children by puppeteering through the swan hatch with two of our favorite puppets, a huge frog called Nyall and Harry a pink hippopotamus. We also gave out balloons to any children who asked. Many were so surprised that we didn't charge for them!

At three o'clock the people gathered for the Service, organised jointly by BCF and Banbury Christians Together. The generator started, the amplifier worked and we were joined by a six piece band to accompany the hymns. Our skipper spoke about the lawyer who wanted the secret of eternal life and Jesus' story of the good Samaritan. (To read Jesus' conversation with the lawyer go to the Bible in Luke chapter 10. )

By 4pm, the crowds were dispersing and the day was ending. We sat on board eating delicious jerk chicken from the Caribbean hot food stall and reflected on a tiring but worthwhile day.

Oh, I forgot. The theme of the day was 'pirates' and there were quite a few about. Three in particular were about nine feet tall! They were fun entertainment for the milling stream of people who went past all day.

Monday was spent returning to the mooring. With so many boats in town the two mile round trip took us over 3 hours.
Posted by eeyore at 17:42 1 comment: