Photos of the boat's travels

The young people who borrowed SONFLOWER for the cruise to Norton Junction and back have put their photos on Facebook, as young people do. I am not sure whether the photos are public but this is a link to one of the albums. This is the other. You may need to be their friend to get a look-see. I am!
Posted by eeyore at 17:35 3 comments:

The theme of The Banbury Canal Day didn't quite fit with our idea of a fun celebratory theme so we dressed the boat up in home made fiery bunting that The Best mate had lovingly stitched, attached doves and attempted to portray The Holy Ghost. Here is a picture of the Best Mate herself next to our cratch with the illuminated Dove of Peace. 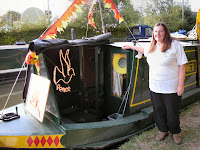 The day really was a brilliant time. We were representing the BCF once more and this year we had three of our members who formed a folk trio to attact and entertain the throng that passed by. The weather was kind and people were having a good time everywhere.

To be fair, the theme worked pretty well. Of course there were a few macabre exhibits (among the boaters) and some of the boats were decorated with a lot of imagingation. The Ghostbusters were prominant and on hand complete with a first response boat (a peddalo) that went up and down all afternoon. There was also a headless ghost at the helm of a tiny clinker dinghy who won the prize for the best moving exhibit.

The best charity stall went to nb Mr Badger who came complete with his own graveyard! He worked hard on behalf Dogs for the Disabled a Banbury based charity. His pork rolls also kept us very amply filled with food!

Sadly to say I was too busy all day to get any photos. Without them it is very hard to describe the colour of a very good day.

The Best Bit, the Best Mate says, is meeting with the lovely boaters with their diverse interests from IWA to Ecover, Tom Rolt's centenary to Gardner Engines the conversation was never dull.

Just like the IWA Cavalcade earlier in the year, I felt the festival really showed boaters having fun!
Posted by eeyore at 13:15 No comments: