Does anyone else have to insert

in order to form paragraphs in their blog? Blogger seems to have forgotten how to put the code in in response to the return key.

I moored at the water point on Tuesday. There was another boat on it! I crossed over and my boat swayed as I jumped off, swilling the bilge water in engine bilge and activating the bilge pump. A stream of dirty water efused from the boat followed by a rainbow of diesel!

I backed the boat back to opposite Tooley's boatyard and asked them to take a look. It is a leak on the No 1 diesel injector to spill rail banjo joint. It has plagued me since the spill rail was changed to a solid pipe following a boat safety examination that disqualified seperate flexible connections between the injectors.They sent John to take a look 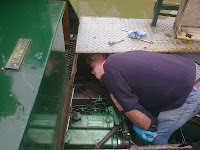 and he spent a couple of hours on it finally declaring that his special sealant had done the trick.

I paid the bill and backed the boat to Sovereign Wharf where I turned, pumped out and filled the tanks with diesel. It is best to keep the tanks full in winter to cut down on condensation and the resultant water-in-the-diesel problems.

This morning the director of Tooley's asked me how the leak was. "I don't know", I said. "John said it was OK so I haven't looked since. Shall we take a look?" I am glad we did. I think he is not! The joint was leaking. The problem now is that, with full tanks, the diesel level in the tank is above the level of the spill rail. Diesel leaks now all the time, not just when the engine is running. Having spent over £1 per litre I am not too pleased it is running into my bilge!
Posted by eeyore at 14:39 No comments: 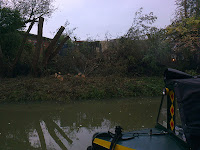 Remembering my post about Tree Worries, we now have a different outlook on the mooring. We see more sky, a stack of portable buildings but have no dangerous trees threatening to flatten us!

Thank you to whoever paid for the tree surgery.

Also for the log that floated across the canal and is now my chopping block.

It is not often that we find a boat in distress on our moorings. 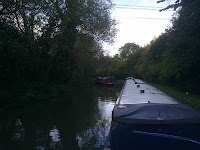 This poor boat was towed from near Harwick Lock and left here to pole themselves the rest of the way into town for Tooley's Boatyard to look at their failed engine. Tooley's were too busy to come out and pull the the boat themselves. A passing boater helped them as far as he could.

Unfortunately we could not help any further even though we wanted to.

I did see them with the mechanic on board under Tom Rolt Bridge yesterday so, hopefully, they will soon be sorted.

It emphasised to me that the subscription to River Canal rescue is worthwhile insurance. I would not want myself or anyone boating in Sonflower to have to pole the boat miles to get attention.
Posted by eeyore at 18:43 No comments: 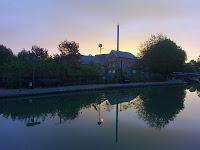 As the sun came up behind the Mill (Arts Centre) beside the Banbury lock. We used the water point having come throughthe lift brodge in the half light and I watched the dawn from the cratch of the boat. The sun comes up somwhat south of east at this time of year and the dawn has a wonderful yellow glow about it.

Within half an hour it was raining.

We backed back through the lift bridge and are moored back in Banbury Town Centre.

My excuse for being here was that it is handy for the Banbury Folk Festival this weekend where I helped man the information desk. It was a very busy but musical weekend.

Unfortunately the Best Mate was indisposed with a very nasty head cold that kept her in bed yesterday amd today. Very unusual for her!
Posted by eeyore at 19:56 No comments:

This morning the sun shone and it looked as if we would have a great day.

A new neighbour with a brand new 70ft boat, "Willy Nilly", asked me to accompany her on the "water run". She picked me up off the boat at Tom Rolt Bridge No 164. The lift bridge 165 in town has challenges for the single hander but we negotiated it safely. On approach I was hailed by Kate Saffin, of Theatre in the Dock Fame, who wanted to return a book I had lent her. Pushing the boat over to Tooley's side of the canal to collect the volume put us a bit out of centre for going through the bridge narrows. But all was fine. We settled onto the water point and filled the boat, the kettle and had a cup of coffee. Taking on water is just something one has to do. And it takes as long as it takes.

A single hander came up the lock and shut the gate behind him. No problem really as my friend wanted to do all the work she would have to do on her own. I did help him through the lift bridge.

Entering the lock from the water point is an easy sweep. The lock at Banbury is at an angle to the main run of the canal and getting it wrong can mean a scrape down the concrete side, getting the cruiser stern stuck under the raking coping and other nightmares. It is best to keep well back and smoothly enter the lock. My friend did it perfectly: 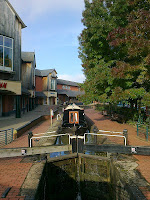 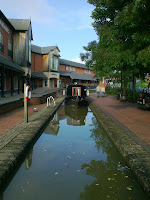 We checked with the hire boaters at the water point that they were almost ready to go up the lock and left the gates open for them. A Canal and River Trust man walked down the tow-path opposite and told us we had left the gates open. We told him that the hire boat was going up but he closed the gates muttering something about saving water! He obviously has little knowledge of the canal as the water flowing over the top gates will spill through the leaking bottom gates anyway and the pound above the lock is fed by the Hanwell Brook. This brook is the cause of flooding rather than shortages with the recent rain! Ignorance is bliss. He must think he was doing his job. All he did was annoy me and inconvenience the hirers who had to open the gates again.

Thence to Bankside Winding hole to turn. My friend did very well here. Turning a 70 footer is quite a lot more difficult than my 57 ft boat. We passed "Dusty" on the way back and pulled over to the facilities to set the lock. It was full this time, the hire boat having worked up. "Dusty" came up and we allowed him to go first. "Working boats have priority" I said. "I wish everyone would think that" he replied. Just watching "Dusty" work the lock taught us a bit about single handling. Don't get too close to the gates when the lock is emptying, you'll be sucked against the gate and could break them; slow the boat with the gates if it is going into the lock too fast; watch the speed that you let the water in so that the boat doesn't crash against the top gate. etc. etc.

Our turn came and went well. Del and Al from Derwent 6 came up behind and were there to help with gates and paddles.

So through the lift bridge we went. Having let "Dusty" go first we now came to a halt. He was delivering to the boat yard and their collection of vessels meant that the way was entirely blocked. A boat was coming the other way too! 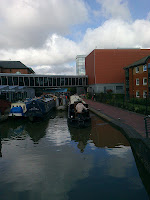 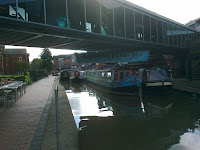 After the way cleared we returned to the mooring. I got off at Tom Rolt Bridge No 164 and let Willy Nilly return to her mooring. I started SONFLOWER's engine and backed her to Sovereign Wharf where I started to turn. In the middle of the turn the boat started to move sideways toward the lock. To my surprise a boat "Zenith" came round the bend and headed between my bow and the bank sucking SONFLOWER toward it as she approached. "Wait up a minute" the helmsman shouted. "Who is turning?" I replied, "Shouldn't you be waiting a minute?!"

Thence to the whaarf for a PUMP OUT. By all accounts they had had a very good Canal Day and the Punch and Judy had been very good. The lack of Punch whacking Judy round the head and the absence of the baby being thrown to the crowd during the performance was noted as a sign of the times.

Then back to home mooring to wait for Dusty and the coal delivery. Good things come to those who wait. 5 bags of Pureheat at £11.00 a 25kg bag. Half what the garages and garden centres would charge.

Thorns are to be expected

I have just received this email.

Advice from Canal and River Trust:

Monday 8 October 2012 - Friday 1 March 2013 We have commenced the annual hedge cutting round, starting on the 1st October running until 1st March. Please be aware this work will result in thorns on towpaths. The specification includes the clearing of cut thorns from the tow path following a cut of the previous year’s growth, our contractors will blow/sweep/rake/clear the thorns off the path, however there will be areas where some thorns remain on the towpath or blow from the hedge onto the towpath following windy conditions. If you are planning a cycling trip please follow link http://www.waterscape.com/things-to-do/cycling/hints-and-tips for helpful tips. If you have a pet be mindful of tender paws picking up thorns on the path and under the hedgerows following this work.

You can find all stoppages at the url below: http://www.waterscape.com/things-to-do/boating/stoppages

Please do not reply to the email. It has been automatically generated.

SO that's the whole of winter then!
Posted by eeyore at 17:12 No comments:

The town centre moorings have been a little cluttered recently by boats awaiting attention at Tooley's Boatyard. With the Banbury Canal Day fast approaching the moorings were all required for the boats booked in.

The notice from the Harbourmaster indicated that all moorings should be clear by 10am. No alternative then but to haul the boats out of town. 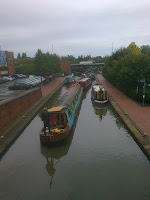 All Tooley's hands were on deck as this group of three unpowered boats were towed away by NB Oxford 1, a tug that was clearly up to the job.
Posted by eeyore at 16:05 No comments: