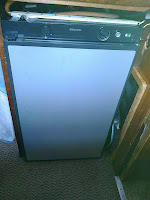 Here it is. After a considerable wait we have installed a new refigerator. I know the web site said this was not suitable for narrowboats but it looks ok to me and fits exactly where the old one stood. Dimensions are identical but this one has 10 litres more capacity because it isn't designed to fit over a wheel arch! 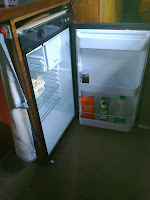 It makes ice too! 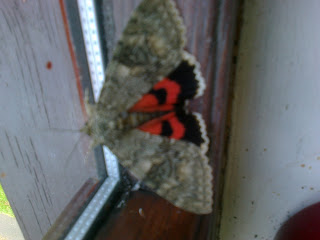 We found this beautiful large moth in our bedroom this morning.

It is about two inches wingspan and the red underwing, which gives it its name, is only visible when it flies.

According to the ukmoths website that I consulted to identify it, it is very common in southern England and its caterpillars feed on alder and willow. It makes me wonder why this was a first for me!

We moor under willows and alders in southern England. 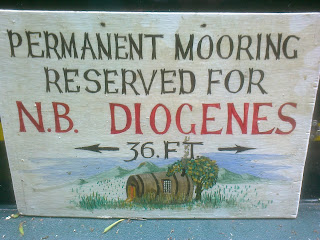 This sign was found floating past our home mooring.

It is now propped up against the "Please slow down" sign just north of Marsh Foot Bridge 163 on the South Oxford Canal if the owner wants to retrieve it.

That is the name of a boat! A white rose adorns it's side so I assume that the crew are from Yorkshire.

We left the mooring this morning at 0700h for the first time in twelve days. We needed to do what boaters do again! Off to the turning point at Tramway and mooring on the mooring of nb Prancing Pony (who is away in Lower Heyford) we filled with water, had a shower and then breakfast. Replenishing our fresh water tank after twelve days takes quite a time! Then back to town and on to Sovereign Narrowboats for Pumpout, blue, and diesel before returning to the mooring.                            2 Locks, 2 LB, 2 Miles 3.5 hours

I had to return on foot to drop something off at a friend's place near the station and passed the lock/services on the way back. Here was nb It's Enough taking on water and waiting for the lock. I commented to a boater washing his boat that there seemed more boats here today than there were at Little Venice and the queue built up.  The skipper of nb It's Enough cruises alone. The boat name is his philosophy.He has lost his voice box to cancer. He talks through a mike held to his throat but is unable to make himself heard across the canal. I went over to speak to the skipper of the first boat in the queue, a very nice shiny boat, to establish nb It's Enough's place in the queue explaining his predicament with his voice and that he had finished watering up and was waiting for the lock. The skipper was ok about this but not his crew when I told her I was helping him up! "We will be here all day!" was her response and she went back to confer with her skipper.

The next boat to come down the lock came almost up to the gate on the wrong side of the canal. I pointed out that the boat in the lock would not be able to get out with the boat in the way and they backed up, putting their paintwork in jeopardy on the high conrete banking above the lock. How unobservant some can be! I worked the lift bridge and handed back the windlass receiving profuse thanks for my help.
I then walked over the footbridge and along beside the car park toward Tom Rolt Bridge. Here I could not believe my eyes. Here came nb The Pratty Flower with its crew remonstrating from the front well deck that there was a boat ahead, maintaining centre channel directly at nb It's Enough! No quarter was given. I imagine that the helmsman had detected that the unfortunate skipper of nb It's Enough was from Liverpool,  Lancashire and the war of the roses was still running.  It struck on the port bow and ricocheted into a moored boat. No attempt to slow down or avoid collision was made!  I wished that I had failed in my negotiations at the lock. The very posh boat behind would have been the target!

You had better watch out for NB The Pratty Flower!

A day out in the country

Yesterday we took German Friends on a little boat trip. A photo album they posted on Facebook recorded a visit to Stratford-on-Avon with references to their liking for narrowboats so we offered them a ride.

The showery weather curtailed our fun a little but we managed to get to the new winding hole at Twyford Mill. They say that boats of up to  60ft only can turn here. They mean it. Our 57ft turning was tighter than I like. I don't like hitting the bank at both ends!

Our freinds enjoyed the day, They were taking a lot of photos on an iphone so I expect to have a couple to post in good time. None ready now though.

By the way, the fridge is NOT working. We freeze 2 pints of milk and then let it defrost to keep the rest of the produce cool in what has now become a large cool box!
Posted by eeyore at 19:14 No comments:

Yes, claggy milk and luke warm orange juice this morning so I opted for toast and marmalade and set about turning the fridge upside down!

A lot of gurgling and tummy rumbling noises came from the machine and we turned it back on. Now the proving time. Cleaned out, fired up and closed we await to see whether the recovery that was partial from our shake around a week ago can become a more permanent solution.

We really do not want to go down the electric fridge route. It would probably mean solar panels or a wind turbine to keep the batteries topped up. I do not fancy running the engine while moored for more than the half hour a day we do at present.