A two hour leisurely cruise back toward Banbury today. Little traffic: Just nb Clara heading north after a short sojourn in Banbury. I was pleased to see her coming out of Bourton Lock but not so happy to see that the strong stream of the bywash trapped her against the weir edge. She had to reverse back party into the lock to free herself. There is a lot of water about today and excess is swirling down the bywashes.

By the new flood meadows there were loads of birds in the air. I saw a bird of prey that could have been a falcon and a pair of Jays. I haven't seen many of them around here so this was very pleasing. At Hardwicke Lock I met a man with a stick who was public spiritedly playing with floating sticks and relieving the build up at the bywash culvert  entrance. After filling the lock, he closed the top gate behind Sonflower and walked off north on his way.

After the lock I met a paddle boarder. She was the first I have encountered on the canals. CRT are encouraging them I understand. I had seen her going the other way this morning nearer to Banbury so I asked whether she had been shopping. There was nowhere to stow shopping on the board however.

I moored just short of the bend opposite the blue cottage, behind nb Freestyler. As I moored the paddle boarder came past again going the other way.

We have to get out of town and today was one of those lovely afternoons with a forecast of sunny periods. The canal was clear and the birds were out in force. Kestrel, heron, cormorant, gulls of all sorts and the hedgerow birds like tits and robins were all around.


There were boaters about too. I came up behind nb Mirrlees who were ascending Hardwick Lock. They had followed another boat into the lock, possibly a Kate hire boat that we saw passing earlier or nb Hermione who when was moored behind Sonflower but not when we left. "three in a row and a bonus mark", I quipped. Nb Mirlees was flying the white ensign and I asked the helmsman about it. He had served in the Royal Navy and the Royal Marines so was entitled to wear it, he said. I closed the top gate for them as they left and as I approached the next two locks I was very pleased to see that they had raised a bottom paddle to speed my way. Thank you very much, nb Mirrlees. 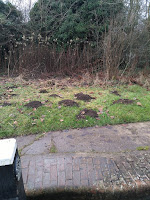 At Little Bourton Lock 27 I noticed that there are unwanted vandals in the lovely lock garden.

This garden used to win awards when lock cottages were the homes of lock keepers and their wives.

I was glad to see space on the 14 day moorings at Cropredy and noted nb Hermione moored up there. I waved as I passed and turned at the Cropredy Coal Wharf and returned to moor just north of him.