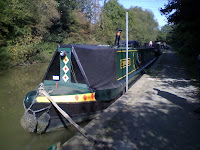 The Met Office says that the winter will be mild. Not as mild as last year but not a hard one. Nevertheless. We are sure to get rain at some point and fog and frost and all the other weather types that degrade the boat.

So now, while the sun shines it is time to put a bit of paint on the boat to cover up those rusty bits where the boat has seen the wear and tear of a good cruising year.

The boat is booked into Tooley's Yard for a full repaint next spring so I have decided to go for the cheap and least time consuming option of a quick coat of Hammerite Smooth Dark Green paint over the gunwales and patching in the rest of the superstructure.

The cost of this little lot about Thirty Quid, including a new wire brush, roller and tray!

Must turn the boat round now to paint the other side before the sun goes in.
Posted by eeyore at 10:10 No comments:

SONFLOWER returned to the home mooring today at about 4pm. Stuart and Marg had navigated 118 miles and 192 locks in ten days.

They say they had a lovely time and SONFLOWER's engine didn't miss a beat.

They kept a full log of the journey which may get transferred into electronics in the future.

Until next time?
Posted by eeyore at 17:55 No comments:

Links to this post
Labels: canal, narrowboat, Stratford and Back

Back on home ground

SONFLOWER is back on the South Oxford Canal having turned at Napton today and is waiting to ascend the Napton flight. With Hatton flight and Stockton locks behind her, the hard wide stuff is past and she is expected home early on Friday afternoon.

Progress has been good and the crew is better. A fall in the basin in Stratford meant a sore back slowed the crew down. They were glad of a locking partner down the Hatton flight and up the Stockton locks. Now the soreness is all but gone and they report that they are still very relaxed.

You may remember my moan about the BW workboats that clutter up the Banbury town centre when no-one would mind them mooring below the lock where leisure boaters feel vulnerable. (A Popular Place)

Well as you can see, BW have now made the mooring adjacent to Tooley's yard their official place of abode. Now they can charge any boat that moors here a charge and stick on one of their red stickers!

The Banbury Mooring Restriction Zone was ostensibly instigated to ensure that visitors could moor in the town centre for a reasonable time (48hr). Obviously BW do not think that leisure boaters should have priority above their work boat.

By the way, there is no vehicular access to this particular mooring. The BW workmen have to approach the canal and park BELOW the lock adjacent to the Facilities building. So why can't they designate a mooring there for themselves?
Posted by eeyore at 22:40 1 comment:

"One of Marg's lifelong ambitions fulfilled- we r moored up in Stratford Basin.....3m 15locks this morning all in brilliant sunshine"

We are looking forward to the photos.

I will keep you up to date.

Anyone the sees SONFLOWER disappearing into the distance, please give her a wave!

Keeping up the pace

Last night she was at Radford Semele after "a fantastic day". They had sunshine and pleasant boating from Marston Doles: 13 miles and 31 locks.

There are stoppages ahead for gate renewal at Lapworth Bottom Lock 27 on the Stratford-upon-Avon Canal but the rain this morning makes it improbable that they will get that far today. A partner boat is needed to ascend the 21 of Hatton Flight in quick time. And who wants to do a flight in the rain!
Posted by eeyore at 09:09 No comments:

Holiday for one or another?

I have been busy, but not with blogging. We went to visit our granddaughter in Kent over the last weekend and the Best Mate has stayed down there to spend some time with her and the family. So we are now boys alone in Banbury. And we are boatless!

We have lent the boat to a couple who were once boaters, were intending to buy a share in a boat, but things didn't work out. They needed a break from a stressful job and so we have lent them SONFLOWER for a holiday. I showed Stuart the ropes on Monday morning and I hope that they are now heading north. They have targeted Stratford. However, the weather doesn't seem too good to be doing 118 miles and 183 locks in nine days. Who knows what they might achieve. That, however, seems like stress in itself to me! They have just sent me a text message to say they are relaxed, and at Marston Doles. (18 miles, 12 locks) That would take me two days!

On Monday we got a phone message from some friends who used to moor and work in Banbury but now moor and work in Birmingham. We had had a chat a couple of months ago and had heard that they were having their boat blacked at Tooley's late in September. We had offered them the boat while this was undertaken as Tooley's do not like people staying aboard! Now they had arrived and the boat is going into dock on Thursday! The other friends who could have lent them their boat are on holiday in Malta and return at the end of the week.

It isn't late September yet is it?

We had a lovely evening last night catching up and drinking a beer together and I told them that our boat, which they had passed on its mooring in the afternoon, was no longer there but was heading north!

Today, I arranged for them to stay in someone's spare room and I met them at lunch time. "Thanks, but no thanks",they said "We have booked into a local B & B, we need a holiday!"
Posted by eeyore at 20:35 No comments:

I don't really like being down the engine hole. It is not really my idea of fun. I love playing with engines but the position of this one is too far down! I am too old and stiff to bend to reach the bottom of the engine now. The engine is also fitted just underneath a bulkhead so that even taking the cap off the cooling water header is difficult. This also means that the water pump, drive pulley and alternator are very hard to get at.

But today, I had to change the oil and oil filter. I usually do this after a Summer cruise. It is probably well over the recommended interval. 250 hours cruising is equivalent to 7,500 miles motoring and BMC recommended an oil change every 3000 miles in 1962! As canal usage is generally at under 1500 revs/minute, I feel that an extension is not unreasonable. A modern diesel engine would be working most of it's life at about 2500rpm and accelerating and braking a lot more than a narrowboat. Another consideration is that one does not really want to be up to one's elbows in oil and grease in the middle of one's holiday!

However, an engine full service at the local boatyard costs £130. This is becoming more and more appealing every time I do it!
Posted by eeyore at 21:02 No comments: