Banbury is a popular place and today I had arrived back in town to have lunch with friends at GF club.

Normally, I would have stopped on my mooring and walked into town but today there was considerable congestion at Hardwick Lock that delayed us sufficiently to merit taking the boat on. We also needed those requisites of life that are provided by the local boatyard; a pump out, gas and diesel. They were shut for lunch when we arrived so we progressed under Tom Rolt bridge to discover that the town visitor moorings were full.

I did not intend to lock down and moor below the lock. We would then have to turn at Bankside and return and lock up again to return to the boatyard. We would miss our lunch date too.

The crew of Sylph saw my predicament. He said he would check with the captain but thought they were leaving in 5 minutes. I backed up, hovered and waited for them to go. They were true to their word and we moored beneath Tom Rolt bridge and went for lunch.

What really got me though was the reason the moorings were congested. You can see from the photo that British Waterways have taken no notice of what I wrote in this blog in July last year. Now however they have not just moored the workboat but a 70foot hopper as well! 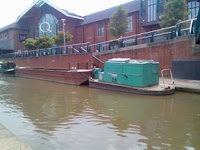 I suppose they think they own the waterway. In essence we tax paying, license paying, mooring fee paying, boaters do along with the rest of the nation.

Come on BW. Moor these large floating objects where we leisure boaters do not want to moor.
Posted by eeyore at 17:02

BW seem to have noted this.

Today, I have seen a BW hopper, dredger and workboat all moored together on the non twpath side below the lock in Banbury. One couldn't get a more mooring friendly placement of these craft.