Mooring space at a premium 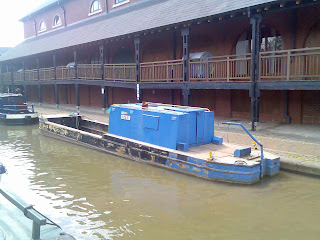 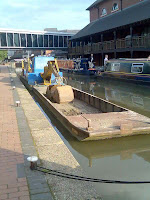 Anyone who has used the canals recently will know that in some places, popularity makes mooring space a scarce commodity.

Having had a kind developer make the centre of Banbury look neat and tidy around the canal and 'rejuvinate' it, BW realised that mooring in the town had become very popular. So they instigated the "Banbury Mooring Zone" and tell people they are entering it at Hardwick Lock and Bodicote footbridge. Between these points they expect you to respect the mooring restrictions and will issue you a penalty notice if you fail to comply.

Knowing the rarity of mooring space one would expect BW to do the same. But do they? No. They moor their workboat, dredger and hopper right slap bang in the middle outside Castle Quay. Mooring below the lock is less popular for the visiting boater and would be much more reasonable for the workboat. The dredger, last used in the vicinity in April, should surely have been tucked up for the summer back at Nell Bridge depot long before now!
Posted by eeyore at 22:38

I'm very tempted to forward this to Robin Evans - probably via Eugene Baston (BW). RE has said this sort of thing makes him very angry too (or something to that effect). One would have thought as Chief Executive he would have the power to do something about it.
Maybe Eugene has a Google Alert which will draw his attention to it.
Sounds like something to send to Narrowboat World.

The workboat has moved on and all moorings are available for visitors. Except the ex-mooring warden's spot which is occupied by Comfortably Numb