The grandchildren returned from their visit to Warwick Castle having made the 596 steps up to the ramparts and the Princess Tower and faced the fires of the Dragons and the Spells of the Witches of Warwick.

All in all they, and their parents, were tired out.

What better food than Granddad's "What's in the fridge Paella" 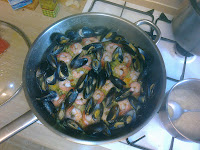 OK! I cheated by getting the mussels pre-cooked from Morrissons this morning.

I had thought that I had blogged about this in the past. However, I cannot find any record of it. If you want the recipe get in touch.
Posted by eeyore at 19:44 No comments:

We went for a very short cruise yesterday just to give two of our grandchildren a ride.

On entering to work up the lock my five year old grandson shouted from the bow of the boat "Stop the boat Grandad, there is a big wall in the way".

It was not a wall but the lock gate!

Today they are visiting Warwick Castle.

The boat will remain on home mooring as it is grey and rainy. Not exactly great boating weather for the Bank Holiday weekend. I have sympathy with boaters like our neighbours on the mooring who only have weekends like this. He told me this morning that his next oportunity will be May holiday weekend. Work makes ordinary weekends impossible. What a pity.
Posted by eeyore at 10:57 No comments:

The boat behaved beautifully as did the crew. A full crew for a change! For the cruise to Nell Bridge we were joined by a friend. At Nell Bridge is "The Pig Place". Here we purchased half a dozen huge free range eggs and a piece of their Gloster Old Spot pork. The last piece we had was excellent ao we look forward to a great dinner in the near future. Back to overnight in Banbury and thence northward.

The weather changed dramatically. As the sky darkened the rain started and it poured. We stopped for a time just above Slat Mill Lock. We had heard from the occupants of nb Pondlife that Bones was in Cropredy so I texted her to ask about moorings. We were pleased to meet up and fill a gap behind her on the moorings below the lock that was just a bit too small for a 57 foot boat. We moored there anyway with the aft a little too far away from the mooring ring so we had to improvise a little with the centre rope. Rather snug nestled up against nb Bones!

Getting to the mooring was eventfull. The winding hole/services at Cropredy was full with a moored hire boat. It was raining so the crew had taken shelter on the water point! Opposite them was nb Emma of Nelson Portsmouth who were proving that the navy can moor a boat anywhere. After the hire boat crew woke up and moved away we shunted fore and aft a few times and then winded, squeezing past Emma to get onto the water point. The skipper from the navy lark crew then popped up and said he would water after us. He hadn't noticed it was a water point and his canal guide had not marked it! I did not suggest that he opened his eyes and threw away the guide.

I ignored Bones' jibes that narrowboats are not supposed to go backwards and reversed through the bridge, past her boat to moor behind.

This morning we set off at 8am. We left Bones behind waiting for her crew and headed to Banbury. On the way we remoored nb Ragtime whose bow had come adrift allowing her to swing across the canal. No-one was home at the cottage.

Then to TOOLEY'S to have the sterngear checked. Matt found that the new bearing to stern gear joint was leaking so called John to tighten it up. It meant just another quarter turn for the gland assembly. Out came the 24 inch stilsons and a scaffold pole. "Are you squeemish?" John asked. We had also shaken the swan neck bearing securing crews loose and the air filter off the engine.

The boat trim was noticably better than it has been for two years.

Where shall we go next? Maybe our home mooring!
Posted by eeyore at 14:46 No comments: