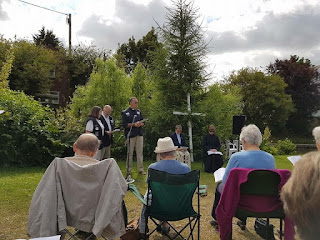 At a canalside service in sleepy Cropredy we were commissioned as Waterways Chaplains for the Oxford Canal (South) today. We have been working as probationary Chaplains for over a year now so this day is long overdue.

We hope that we can use our official windlasses to help boaters through locks and the other ups and downs of life with humour, compassion, empathy and love. Boating is great fun and we meet many many people who for many many reasons are finding it hard at the moment. All we want to do is help them on their journey.

Thank you to our Senior Chaplain, Mark  and his colleague and wife, Zilla, who made these exceedingly wonderful celebratory cakes! 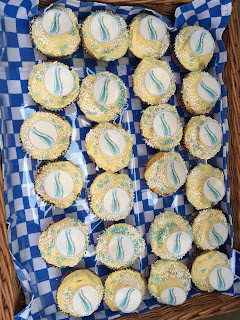 Thanks too to the Vicar, Minister and members of the Cropredy churches for enabling us to use their service as a backdrop for this occasion.
Posted by eeyore at 17:14 No comments:

Dog in a lock! and other excitement: Ivinghoe to Old Wolverton

We set off in time to get a bite of lunch at The Grove Lock. I am not sure whether the pub is known for its dog friendliness but a dog owner was on his way there with his dog extending lead while we were descending the lock. Suddenly behind us was a whippet on a string on the cill, water cascading through the leaking closed gate and perturbing him somewhat. Gently backing the boats toward him spooked him more and he jumped into the water: the most dangerous thing for him to do with two narrowboats backing and props sucking in water to the swim. We feathered the props and gradually drifted in, getting him back on the cill. A crew member of the Wyvern hire boat bravely whisked him up and handed him back to a very pleased owner. They were seen in the garden together enjoying the sunshine and a beer.

I have never shared a lock with a dog before and don't really want to again.

The afternoon was slightly uneventful after that and we enjoyed the fun at Soulbury Three Locks amongst six Wyvern boats going down and two coming up. It was just the place to observe that the seriously good training of the crews that we witnessed earlier in the day at Leighton lock really did not permeate to every member of the crew. We advised and helped as necessary but did not want to be too intrusive in the proceedings. Suggesting that the crew member opened the paddle to let the water out rather than just standing there looking pretty is hard to do tactfully though! Two of eh helmsmen just did not seem to be interested in the lock operation at all, staring into space instead of paying attention to the water and positioning of their craft.

Dinner was taken outside the Three Locks Pub and we stayed on for their Friday evening offering of Beatles, Hollies and Stones covers (live music). Our musician called it "guitar karaoke" as the two guitarists, one tele, one strat, played and sang along to drums and bass from a box!

We set off in the morning at a gentile time of 8am. At Stoke Hammond lock a hire crew were moored on the lock mooring but were not, at this time, ready to descend. A lady crew member said that she would like to watch us do the lock as we "looked professional". Her children were buzzing around the whole time too. We told her we all have started in hire boats and made a load of mistakes! But this time it went as it should and we parted wishing them a lovely holiday and assuring them that Milton Keynes was not such a bad place from the canal side! We  stopped for breakfast just before Fenny Stratford and then worked through the lock with the one foot fall and silly swing bridge in the middle. Here I disembarked the bicycle and left the tiller in my son's hands to steer her around Milton Keynes while I went to Bletchley Station and took a train to Cheddington to cycle back to where our car was parked. I then drove to The Galleon at Old Wolverton and waited for the boat to arrive with a beer and nachos.

We rendezvoused as planned and finished the boating day with a meal in The (All New) Galleon Inn.

Hottest Day of the year and I set us a target of 6 miles and 9 locks.

We started in the shade of the bar at The Old Swan on Cheddington, a 15th century inn that has been brought into the 21st Century and serves local real ale.  I looked for a Tring Ale but had to satisfy myself with Vale Brewery Brill Gold It was gorgeous! The posh fish finger sandwich was a bit of a let down. But this is not a pub revue it is a boating blog.

We walked to the boat beside Cheddington Bridge 126. On the way I discovered that I had not got my keys with me! The front doors are padlocked! They latch easily without a key but are not so easy to open. Our 6 footer said that was no problem as he would jump down into the houdini hatch!  In fact he didn't need to. When we got to the boat I lifted the swan hatch lid and the "no more nails" (well past its useful life) gave way and the lining ply to which the bolts are screwed fell off and we were in!

So we set off! It was sweltering and all the locks were set against us. After the 3 Seabrook locks we were gasping for water and called it a day!

I am now sipping cooled Brecon Brewery (bottled) Target IPA in the evening sun while the best mate has a glass of chilled Sauvignon Blanc.