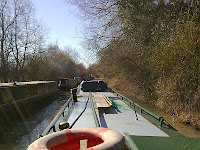 This morning I was pleased to see nb Heron's Rest on the water and breaking the ice on the way to town. They have the second longest stay with Tooley's in the last year as they struggled to fix a diesel stove that would not light. All sorted now though. They were not returning to the yard but were heading for Oxford. I was pleased because I do not like ice-breaking. I had to wind this morning which, with ice floes either side is interesting. Then off to town again.

This visit is for re-blacking. There has been a lot of diesel on the surface of the canal this winter and it has taken the blacking off at the water line. As this is the most important area to protect, I felt it was important to get it re-done before the cruising season starts in earnest.

It gives an opportunity to do the snags as well and re-torque the engine cylinder head while it is there.
Posted by eeyore at 11:58