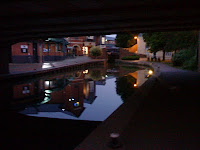 After the performance of the England team this evening it was good to walk along the canal and see this scene. Such serenity, even in the heart of a busy town in a Friday night is a treat that would cheer up the most dejected and downcast soul.

Five live, bless them, have just reminded me of Italia 90 when England did not win their first two games and ended up in the semi-final, going out on penalties to Germany. Apparently there is hope for the hopeless.

Rooney was awful tonight. Why make the same substitutions as were made in the last match. Obviously Cappello believes he doesn't need to change the system. Any fan who watched tonight will know that he needs to put the team out and tell them to play like they do week in and week out for their team back home. As in 1966, they need to do it their way. Hurst, Peters and Moore were playing the West Ham way for England. They shined. Terry, Cole, Cole and Lampard do it for Chelsea, Rooney and Carrick do it for Man U, Carragher and Gerrard do it for Liverpool, and there are six Tottenham lads in the squad. Let them do it for England.
Posted by eeyore at 22:15