4 April 2016
We drove to Leighton Buzzard and had a dickens of a job finding somewhere to park near Tesco. Only 3 hours allowed in Tesco, 1.1/2 in Aldi, 2 hours in Waitrose, 2hours on street parking so we ended up in a multi story at £6.50 for over 5 hours. "Still cheaper than a £70 fine" my First Mate for the day philosophically mused.

Then a 70 bus to Bletchley Bus Station and a longer than necessary walk to the boat via Bletchley Centre and following directions to the canal from a postman.

The boat was ok and so we put the kettle on and prepared her to depart. It was sunny when we left at 11.45am but showers followed occasionally through our uneventful cruise to Stoke Hammond lock. Here my First Mate for the day, Stuart, helmed the boat and I worked the lock. Stuart has experience of SONFLOWER from the past having cruised on her with his wife on several occasions.

We saw quite a bit of wild life. A pair of mandarin ducks were probably the highlight but a heron stood firm on the bank as we passed and we watched a wheeling buzzard for a time getting ever higher and higher. A moorhen guarded her three chicks in a reed bed and ducks chased each other around the skies. 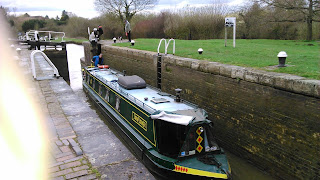 We moored below Soulbury Three Locks and went to the Three Locks pub for a very nice lunch. The ale was very nicely conditioned and enjoyed by us both.

John a cheery CRT Volunteer prepared and helped us through the locks. He skillfully used the off side gate paddles to keep us against the near wall so we only used one gate but were not unduly slowed by only using the ground paddles on one side which is my usual careful modus operandae. Here Stuart helms the boat in the Soulbury Bottom Lock while John closes the gate behind him.

Having risen the 20 feet at Soulbury we cruised on to Leighton Lock. This is just before the Wyvern Shipping Company hire base and training on lock working was in full swing and there was a party of schoolboys fishing for carp at the lock entrance. When I say fishing for carp, their gear and bait indicated that this was their intention but the location was definitely not where I would expect any self respecting carp to be at that time of day! Their gear was good and new and I had the feeling that they were in their first outing. They littered the place with wrappers from Tesco barbequed chicken which I picked up, put in their carrier bag and gave to them to take home. 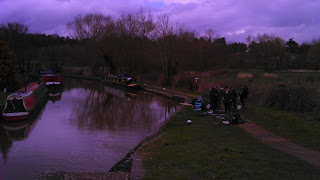 Sonflower waited for the hire boat pair to come out and then we worked through, The enthusiasm of the next crew to open the paddles to fill the lock was calmed by my shout "Hey, that's my boat in there! Not until we are ready!" Sometimes there can be too much help on hand!

We thanked Wyvern Shipping for their help and negotiated their base where boats were moored four abreast leaving little room to negotiate the floating tree trunk that happened to be in the remaining passage. As we left the base we heard the first chiffchaff of the Spring singing in the tree tops over their car park.

We then looked for a mooring as the sky darkened again. Long term moorings abounded until the 2hour linted shopping mooring at Tesco: thence through  Bridge 114 and past the services to the Leighton Linslade Visitor moorings. These are signed "14 days per Year"! Where did CRT get the authority to make that sort of a declaration? I bet the hire boats are moored there waiting for turn around day more than that each year. We moored between a narrowboat and a wide beam, closed up the boat and went to retrieve the car as the rain started in anger.