Another "free day". After the opticians appointment that was! We drove (not easy as the A423 was closed at Marton and we had to divert via A45 and M6) up to Hawkesbury Junction. There we met our friend Stephen (who gave me a lift to leave the car at Hawkesbury on the way up to Fazeley) as he prepared to skipper nb The Hargreaves with a very valuable cargo on a charitable trip.  We  made SONFLOWER ready and set The Best Mate off at the Tiller with a scotch egg, apple and tortilla chips.

I returned to the car ate my scotch egg and drove to Ansty. We knew that the M6 was blocked as we had come past the queues on the opposite lane but Sheila the satnav wanted to take me that way. I refused and we wound our way through some estate roads of Coventry to the A46 and the Ansty interchange where we got onto the Ansty Main Road. I parked down a side turning opposite a layby that was marked "Bus Stop" which I thought would be handy for the return journey by bus. I walked down to the canal to wait. 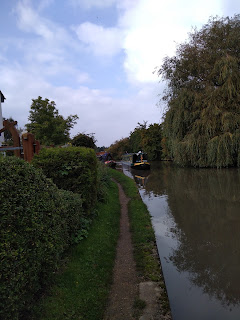 Here is SONFLOWER arriving for our rendezvous.

I boarded her and took the tiller. I had told The Best Mate that Ansty was about half hour away from Hawkesbury. In fact it is about 1 hour and 25 minutes so she needed promptly relieving.

We then cruised to Newbold-on-Avon. Not without incident. At the second Ansty bridge a boat was coming toward me and did not give way even though we were part through the bridge hole. In fact we did not touch! I commented to him as we passed that he knew the local canal better than I did. I would never have attempted to get two boats through a bridge hole. We cruised ahead of a working boat for a long way. We were met by a hire boat as we were passing a moored boat just before the M6 bridge. Here the helmsman pulled over so far that he came to a stop on mud. The boat was still there when the working boat passed a few minutes later. He might still be there! We were fortunate to have the swing bridge at Stretton Stop opened for us. We met another working boat at a bridge on a bend and this time I hooted to say I was going through and the boat gave way amicably.

The best mate made bacon rolls for an afternoon snack and looked at Traveline on the phone while the bacon was grilling. She reported that if we get to Newbold before 5.00pm there is a bus at 5.08 that will get us back to Ansty. That would eliminate the need to rise early and get up early to get a bus at about 7.45 to get back to the car to get back to Banbury to meet our son for Wednesday lunch. The plan sounded good and time was almost on our side. Our rendezvous was at 1345 and trusty Nick said it would take 3 hour and 10 minutes to Newbold. We should arrive at the Tunnel south portal at 1650.

When we got there we noted a mooring but the towpath was very muddy. We went a little further but decided that the further we went the further we would have to walk. So I backed back to the mooring and we tied on to rings. Unfortunately the sloping sides of the canal here, lined with slabs of rock do not let the boat come right into the side so it was a small leap for man but a huge leap for the Best Mate to get off.

I remembered my walking stick was left on the back deck so took the spare from the cabin and disembarked. We walked to the bus stop, ostensibly 9 minutes away, and waited for the bus to arrive at 5.08. We were there, the bus came about 5 minutes later. We had a connection to make at somewhere we had never heard of: The Caludon Centre (Stop Wh) in Walsgrave. It turned out to be the University Hospital Bus Station. The connecting bus was thankfully late as well and we had about a five minute wait. The 74 bus took us to Ansty but did not stop at the expected bus stop but sailed past to The Rose and Castle so I had to walk (limp) back down the road to our car.

I drove home and The Best Mate said she was past it and went to bed.

I made myself a Spanish omelette.