Easter Bank Holiday Monday and we are all tucked up inside and snug warming ourselves against the icy blasts as the temperature outside plummets to below zero.

Then we get a call from a friend who are enjoying a canal holiday with friends on an Ashby Boats 10 berth 68 footer. There's been an accident and one of the crew has a suspected broken finger. They had come down the Ashby and the Oxford canals as far as Fenny Compton Wharf. Could we help?

As soon as we finished lunch we dropped everything and got in the car and headed through blinding snow showers for the Wharf Inn where we rendezvoused with the casualty. 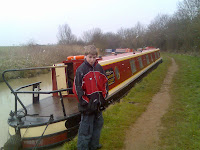 We swapped our two boys for the casualty, her mother and her sister and headed for the Horton Accident and Emergency in Banbury.

Two hours later, triaged, examined, x-rayed and strapped up we returned to find that the nb Bosworth had made good progress through Claydon flight and was emerging from the bottom lock. 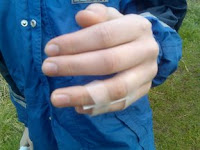 The cruising plan had been amended however. No longer was the target to get to Banbury or even to Cropredy. The crew of intrepid arctic navigators were now willing to allow the captain to turn the craft at the next winding hole and return by the way they had come.

After a perfect turn we ascended two locks together and then left them to enjoy the rest of the holiday on the return to the Ashby Canal. 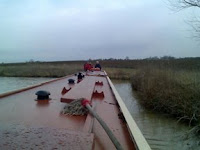 In spite of the most unseasonal weather the whole crew seemed in excellent spirits. We hope to hear all the news of their exploits over lunch on Friday.
Posted by eeyore at 17:40

Hello. This post is likeable, and your blog is very interesting, congratulations :-). I will add in my blogroll =). If possible gives a last there on my blog, it is about the Massagem, I hope you enjoy. The address is http://massagem-brasil.blogspot.com. A hug.