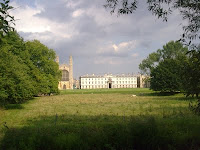 My cousin came from Sawley to meet us at the boat and take us into town to walk around the sights. It was good to see her and her husband, and their two children.

So we became foot soldiers in the tourist army this afternoon. It was hot and the streets were quite full of every nationality imaginable. The students go home and a new wave of visitors come in. We resisted a ride on a punt (about £12 an hour) but spoke to a punter. He convinced Piglet that his future career will be running a punt with a tale of taking a thousand pounds in the last three days. Set up costs of about £8000 didn't seem too bad for that sort of return. The punter didn't see that sort of money though. He was grateful to be working in the fresh air rather than in a pub for the summer. Cambridge University is celebrating its 800th anniversary.

We didn't go into any of the colleges. Their visitor charges of between £1 and £3 depending how much of the college was open to view don't seem too bad. But witha party of eight a couple of colleges would have set us back £25. We spent a tenner on ice creams instead. I peeped in to see a manicured lawn or two. 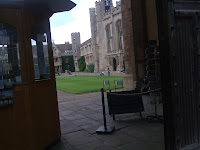 Once you have seen one quad you've seen them all. The architecture is not as impressive as Oxford and the main colleges all seem to be very pressed in on one another. I much prefer Oxford. But then I'm an Oxford man really!

We returned to the boat exhausted and put the kettle on. We are planning to do boaty things today.
Posted by eeyore at 07:46