It has been a long time since I have blogged.

SONFLOWER has been to Little Venice again this year for the Canalway Cavalcade. The weather was not quite as kind as last year and we had very heavy rain on Sunday that dampened things down a bit.

Sonflower was taken down to Bull's Bridge by our freinds who had a good time of it, meeting some of their friends on the way.

I met them and Sonflower there and then took her to Little Venice where we moored for the festival. We were not in The Pool this year so felt a bit out of it but we enjoyed taking part in the Saturday night Entertainment and the Parade of Illuminated Boats on Sunday evening after the rain had stopped. 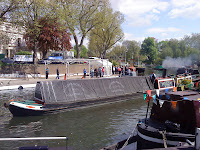 Here is a photo of steam working boat President and butty Kildare (slightly out of control) during the parade of historic working boats.

Sonflower is now crewed by another couple of friends for most of the return trip.
Posted by eeyore at 16:55