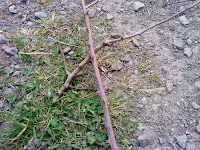 I walked down the flight at Napton this morning. The only problem I had was that I forgot my walking boots! I soon picked up a thorny branch in the sole of my sandals.

Inconvenient you may think but not much of a problem. But there were actually loads of branches from the hedge battering that were strewn on the tow-path. The hedges looked nice and are sprouting beautifully and evenly but the tow-paths are a mess.

As fate would have it I met a BW man on a bike. He was not a lengthsman or a lock keeper any more. He is now a Data Collector. I asked him how he could ride a bike on paths like this. I certainly couldn't. He told me that his BW issue bike had solid tyres! Apparently these are available here on the internet.

So BW know about the problem. They can overcome their sloppy quality control on their hedge cutting contractors by expending on solid tyres. A pity they didn't inform the other cyclist I met today who now puts his old holed inner tubes back in as an additional layer between the new one and the tyre, or the man I met last Saturday who is now walking 20 miles a day pushing his bike and trailer from London to Birmingham because he cannot keep up with the puncture repairs.

If BW think the tow-path is a gym, they should take a bit more care to give us a surface we can safely walk, run or ride on.
Posted by eeyore at 16:30

He He, well that puts a stop to the mountain bike speedsters then lol