Yesterday we made good process from our overnight mooring at Hatton Top Lock, patting ourselves ont eh back for our previous eveining's work. It was a nice morning and we soon got to Tom o' the Hill moorings water point. Here the condition of the side of our boat was noted. The flanks were caked with mud splattered up to mid window level by the heavy rain during the night impacting on the already muddy towpath. Nothing that a good hose down would not cure, however, and The Best Mate shut all the windows and handed me the nozzle for the hose.

After our ablutions we progressed to Kingswood Junction where we stopped for bacon butties before the ascent of Lapworth flight. The start was good although we were following a Canalclub (ressurrected Canaltime) boat that was slightly impeded by inexperience and low water. The helmsman insisted on leaving his lock before the previous one had let water into the pound above and had difficulty keeping afloat!

After three locks oit atarted to rain lightly. Thinking that the weather man's prediction, conveyed to us by a teacher in the boat behind, of "light Showers" was true we were unperterbed. However, the sky darkened and the rain became a deluge and The Best Mate wished that she had taken up the offer of a coat rather than 'enjoying the cooling sfffect'.

Lapworth flight is not the place to be when a rain storm comes on you. There is absolutely nowhere to hide and nowhere to moor to escape the wetting. After ten locks Tigger decided that inside the boat was the only place to be and reduced our crew by a gate opener/closer. I did not blame him as he could not understand that he could not get any wetter!

By the time we got to the second to last lock (No 3)we were glad to find the rain stopping and to find a very knowledgeable and customer orientated BW lengthsman who was adjusting the water levels in the flight. He had responded to the call of a previous boat and was working to help the boaters in spite of the terrible conditions. Well done Mr lengthsman. He also directed us to the nearest hostelry, The Wharf at Hockley Heath, where we moored to dry out, do a bit of shopping at the nearby One Stop and wait for service for dinner to commence.

We were patting ourselves on the back because of our second successful day having navigated 19 locks when nb Firefly joined us on the mooring. They had just completed 12 miles and 40 locks! They deserved their G & T!

We had a meal at The Wharf and were very pleased with what we received. We declined the offer of a carvery meal and selected meals from the Specials board or the main menu. Prices were good value and we also ordered puddings. Here is the Best Mate's Sundae to give some idea of the generosity of the portions! 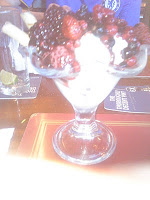 Hope you have all dried out! We are bringing oilskins and wellies!! Talk to you tomorrow evening! S