There is an entry in our log that says, "Saw pirates, rescued damsels in distress and wrestled giant dragonflies".

Today we were pursued by Pirates aboard Willow Wren day boat Little Grebe! We managed to repel them as they tried to pass in a cutting marked "Unstable Cutting, Falling Trees" as I felt they would end up aground on land-slipped banks or, even worse, send us aground. After this thwarted attack they came past seething threats and "ahar me 'earties!". It was good to see a group of youngsters all set to light heartedly enjoy the water for a day! 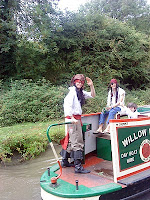 They moored just short of Stretton Bridge. Watching their antics mooring was an entertainment in itself but what was happening just through the bridge was another type of entertainment. It turned into a boat handling competition. With hire boats moored three abreast the canal was reduced to single file. One boat had just come through the swing-bridge narrows and gave way for us to pass the moored boats but the two boats behind it did not read the situation and I had to wave the boat behind us back to alleviate serious congestion. We all managed to manoeuvre through but the need to give way gave nb Anita Gail the opportunity to leave the water point on the north side of the narrows between us and the boat behind. No real problem one might think.

However, when passing moored boats I slow down to 1000rpm on my BMC 1500 operating through a 2:1 Hurth gearbox with a 16" propeller. That means about 1.5mph. This was too slow for nb Anita Gail whose skipper shouted at me that he had to keep going into reverse to keep from hitting me! (I recalled Rosamund the Fair who used to keep control of the craft at 1mph with 40 diners aboard by intermittently but regularly using the engine in forward only. If they can do it anyone who has a bit of nous could do it. Going slowly is something every boater should be able to do!) When a space allowed I slowed even more and let him pass seething rage! How could it be MY fault that he couldn't go any slower? There is a boat on the moorings in Cropredy that has a sign in the window: "Keeping full control of a narrowboat at 1 knot is a skill much admired by moored boaters".

We passed them later today moored at Hawkesbury junction. I wonder what they do with the few minutes they saved.
Posted by eeyore at 18:54