"I've had miles and miles of poly round the prop..." Sings the chorus of a boating folk song about the BCN (Birmingham Canal Navigation). And now we have experienced it. 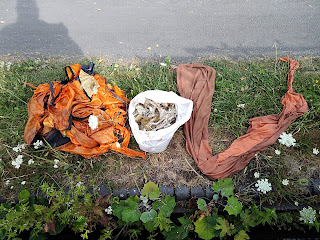 We set off this morning to do the loops. That is Oozell Loop, Icknield Loop, and Soho Loop which are rarely navigated parts of the BCN Main Line. All went well and we exited Soho Loop onto the Main Line and stopped for breakfast at Smethwick New Pumping Station. Here CRT had an awareness promotion. Except the volunteers were not wearing uniform or badges, didn't realise there were two parallel canals where they were; could not answer simple questions about boating but did recommend a visit to Titford pools.

Just as we pulled away the poly struck. I could not get to the side but shut down the engine mid canal and opened the weed hatch. With craft knife and brute force we filled a carrier bag with poly including braided tape saying "security sealed" It  was not tearable.

We turned the tight right hander into the entry to Spon Lane Bottom lock. Here only one antivandal mechanism worked so I reported the defective one and we worked up on one paddle. All sorts of rubbish were successfully navigated through the looks but we came to a halt making the tight right-hander after the top lock. I poled to the side here and secured the boat on the lock mooring. The offending item was a tent. I pulled much of it off and cut it away but had to open the weed hatch again for the last fragments and some fishing nylon.

We stopped for lunch at Oldbury Bottom Lock. No problems here except more rubbish and a reed bed that we had to push into a lock with us. We got to the top and debated where we needed to turn and how far we could go. In the event the decision was made for us. We grounded entering Uncle Ben's Bridge and during a turn in the Uncle Ben winding hole, avoiding a coot's nest, we grounded again and picked up something else on the prop. I went to the weed hatch for a third time. This time it was a long length of cotton cloth.

We decided it would be fool hardy to try to get to the pools and went back a little way to mooring rings.

We walked to Titford Bridge in the evening passing two shopping trolleys and other debris in the canal. The water is too dark to tell whether the actual depth of the channel was shallow too.

We have not seen the pools yet.