Stoke Prior to Birmingham

15 July 2018.
We returned to the boat courtesy of a friend whose mother lives nearby. Sue-per crew is with us too. Just time for a drink in The Boat and Railway and a look at the World Cup Final before we let go and worked through the Stoke locks to moor below Tardebigge Bottom lock.

16 July 2018
0530 and Sonflower sits on her mooring  opposite The Queens Arms where there was a 40th birthday party last night. The crew needed an early night and a good night's sleep. 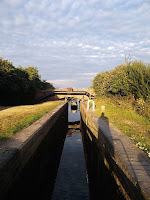 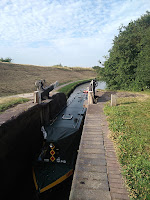 The Best Mate demonstrating the accuracy that she learned on entering the locks. They have a by-wash to throw the boat to the right as it goes in.

We soon got into a rhythm. One of the crew went ahead to set the next lock while the other closed the last after the boat. In this fashion we alternated and the load was totally shared. The locks were set for us until lock 40.We then had to empty six locks before they were set for us again.
Nick's Canal Planner says it is 2.1/4 miles and 30locks from bottom to top. The mobile phone walking app in Sue-per crew's pocket recorded 4.1/2 miles!

We were at through the Top lock and tucking into breakfast at 9.30am.

We decided to move straight off toward  Birmingham. The tunnels were mainly dry and our only problem was a "shiny boat" with a very bright headlamp that sat 50 yards inside Targdebigge tunnel all the time we made our passage. The light was blinding as we approached him. Obviously the helmsman did not trust himself to keep off the wall or our boat as he passed! Our light entering the tunnel brought him to a complete halt. We did brush the side in Shortwood tunnel and Sonflower's gate made an amplified rattling din as we did so. Water level was a little lower that usual and the gunwhale was just below the rubbing wooden rail on the side so the gate rubbed against the wood.

There was dredging on the stretch through Edgbaston and we had to wait for a tug pushed hopper to pass through the railway bridge narrows. The dredging has made things a lot easier through the bridge narrows which used to almost bring the boat to a standstill because of the lack of water under her. I have never been through them quicker that this time.

We entered Birmingham and took on water at Cambrian House. There was space in Cambrian Basin so after checking in the office we moored on a pontoon in accordance with Mooring Agreement Terms and Conditions 4.10. The prior written consent is displayed in our window!