The last three things to do today I did not get done!

The crew left banbury on the Summer Cruise at about 4.30pm today but we did not get to do the greaser or the briefing.

So I decided to go to Cropredy to meet the boat after I had been to the matinee of Piglet's school perfomance where he played violin in the orchestra.

I got to Cropredy Wharf at about 5.30 NSD passed a little time on our friend's boat, playing his takemene guitar and sipping his malt whisky while I waited for Sonflower to come and they got ready to go to a barn dance. Sonflower did not arrive before 6pm so I phoned to find that the engine lost power at Bridge 157! Just before Slat Mill Lock. I got in the car and went as close as I could (Slatt Mill Farm) and accessed the canal at Bridge 156 and walked down the towpath past the lock to Bridge 157. There I found that the skipper of the crew had diagnosed the problem as metal fatigue on the Marine Master morse controller. A cable tie was put in place to jury rig the controller enough to get the boat through the lock and I left the crew to navigate to Cropredy Wharf where we called River Canal Rescue.

Here is Sonflower limping toward the wharf with hardly enough reverse drive to stop safely. 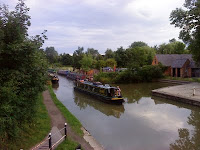 This picture shows the cable tie on the controller mechanism. 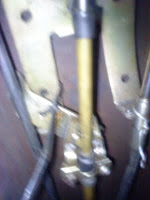 RCR said they have a queue of breakdowns so we moored the boat opposite the winding hole by Bridge 157 and await their call tomorrow morning.

I left the crew at 9.30pm preparing dinner.

Not a good start to the cruise.
Posted by eeyore at 22:26