The first time, in spite of having a very good description of the problem over the phone, they came to look. Two "young guys" our skipper described them as. They went away to get a new morse controller as the obsolete 25 year old Marine Master was broken as described!

They returned well over an hour later with some tools in a plastic box but had to borrow the right size of screw driver to dismantle the old drive. Offering up the new one showed that a screw hole did not line up. They did not have a drill to make a new one! So off they went off to get one. Another hour or so passed and then the new controller was fitted. But not without dropping a couple of screws (for which they had spares), losing a nut (for which they didn't so fitted a larger size)and losing a grommet that they probably didn't know they had knocked off as they left the hole empty.

However, the new RCR parts insurance scheme is beginning to pay off as all that was charged was the £50.00 excess. Here it is looking the business: 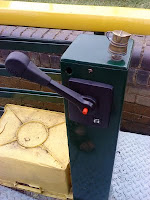 I had assured my relief crew that they would be under way in no time. In fact they didn't get away until well into the afternoon. I caught up with them at Claydon locks and they were them settling into the cruise and were very pleased to be making headway. Here they wave good bye at Claydon Top Lock 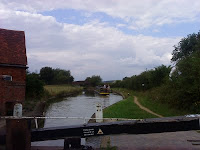