What a winter. it may be too early to say so but the weather has been perfect for short cruises this year and we have managed to fit one in! Many people wonder what the attraction of going somewhere and back again is. To get out in the fresh air and sunshine is allways good. With a breeze in the air to stir the birds into flight and keep the clouds moving to ensure ever hanging skies is a delight. Water bubbling and gurgling around the rudder and prop to the steady throb of the deisel engine is music to my ears. 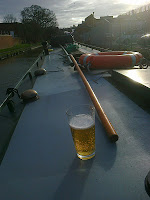 To make it very special is the first glass of beer of the New Year. Yes, honestly!

Here the crew are dutifully walking toward Grant's lock while SONFLOWER waits. 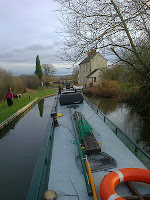 In fact some nice boaters had left the lock to fill after their exit, which made things easier. Aren't boaters nice? We only went as far as the new winding hole near Twyford Mill where we turned. This is marked as only for 60ft boats only. Our 57ft is well within the limit but the proximity of a moored boat made the turn very tight.

The smell of potatoes baking in the oven wafting up from the cabin made the return very pleasant but we did need the fire alight to warm the crew after working the locks. Here we are returning to Grants lock. 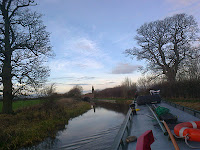 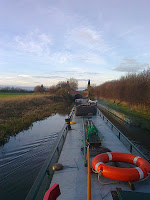 The lock had been filled while we turned by the crew of an inflatable dinghy out for an afternoon jolly who had worked up the lock. We never caught them up!

Here we leave Grant's lock behind. 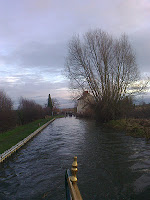 The smell of pork roasting joined in with the potatoes as we went under the M40 motorway making my tummy rumble as juggernauts rumbled overhead.

We headed back toward town under blue skies. The familiar lift bridges are always welcome and comforting on the familiar approach to Banbury. 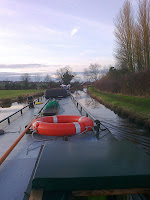 Just there and back again: 6 miles, 4 locks and 2 Lift Bridges in 4 hours.

The pork, potatoes and gravy did taste good!
Posted by eeyore at 09:10