Who left it up?

I went for a walk to Cropredy this afternoon. It was such a beautiful afternoon. The towpath on the S Oxford is not in very good condition with quite muddy bits and walking boots would appear essential as there are numerous holes and depressions to turn one's ankle.

At Slat Mill Lock I found a top paddle open. The bottom gate leaks and the Cropredy pound was already 6 ins lower than the spillway cill. 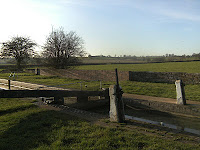 I closed it.
I met two pairs of walkers who were coming the other way from Cropredy toward Banbury. They had been on the good bit but the first couple asked of there were a better way back. I directed them over Bridge 156 to Slatt Mill Farm and told them to follow the farm lane to the road. The second couple asked about the time it would take to Banbury. About 1.5 hrs was what it had taken me to get there so I conveyed this information to them. I forgot to tell them there are no buses back again.

Here is a picture of Bridge 156 in glorious sunlight. Not bad for January. 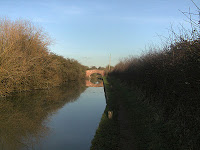 I had also forgotten that there are no buses from Cropredy after 2pm. Fortunately I have friends there who gave me a cuppa and a lift back. Thank you, you know who you are.
Posted by eeyore at 18:01