Where are the Craftsmen now? 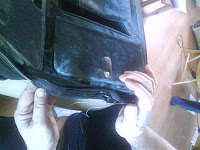 Piglet's violin case needed sewing so I got out the sailmaker's needle and some fishing nylon and set about it. What I didn't have was a sailmaker's 'palmy'. This is a leather pad that sits in the palm to stop the needle pricking the palm when pushed through the canvas cloth. I improvised one with gaffer tape and a two pence piece. Unfortunately this was not quite good enough and after stabbing myself for the second time the 2p was replaced by a jam pot lid. It got the job done!

But it set me thinking. While sewing one has to do some thinking and my thoughts went back to Battersea Power Station in the sixties. I trained there. There was very little that we could not make on site. And the men were craftsmen of every different type. We even had a sail maker among the workforce. He was also a rigger and most of the time he would be re-roping cranes or lifting heavy weights with slings and shackles, pulleys and hoists. But when we needed a new canvas chute on the ash plant or a new flexible connection on a fan, Harry the Claw could be called on to do the business. Out would come his needles and palmy and he would sit on a stool in the corner of the workshop and sew as happy as the proverbial piggy wigggy. In this modern throw away society I wonder where men like Harry are today. DO we have anyone who can turn their hand to just about everything. He has been born into boats on the Thames barges and grew into the trade of his family. He was a waterman who had reluctantly come ashore as the barge trade declined. He brought the skills and the attitude of the water with him. If it could be done on a boat it could be done in the workshop of a power station. In fact there was very little that could not be done. Our welders were also blacksmiths and platers, Our fitters were turners and millers. Our machinist could help out with the carpentry and the carpenter would plaster and paint as well. Battersea was often criticised for 'restrictive' practices but when I was there, if the need was there and the plant demanded it a reasonable request was always met with enthusiasm. Men like Harry were proud of the skills they possessed and were pleased to show them off.

Can we make anything here nowadays?
Posted by eeyore at 14:58