I thought I would get the bike out to pop into town and give myself a little nmore exercise. Unfortunately the rear tyre definitely would not support my bulk so I got out the footpump to put a bit of air into the tyre. I bought a new footpump from Aldi. 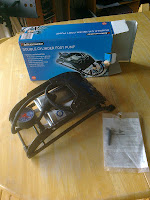 I bought it on one of our routine grocery shopping trips and it has been in its box now for about six months, unused. I attached the dual pumpo head to the shroeder valve on the tyre and trod on the footplate. A large hissing sound greeted me but the tyre, instead of inflating, went flat as a pancake! The special dual head on the pump, designed to service small "dunlop" type bike valves and larger "shroeder" car tyoe valves, was letting air out of the one not in use and not letting any air go down the one in use! Vorsprung dur technik as they say in Germany but no use to me! Of course I had no receipt. The grocery shopping receipts had long gone in the shredder.

I emailed the manufacturer in Germany. Initially I receved a kurt reply saying NO RECEIPT - NO WARRANTY! I then asked Customer Services politely whether I could purchase a new pump head. This time I got the pleasant reply that a new pumphead andphoto instructions would be sent to me. They came today. Here they are: 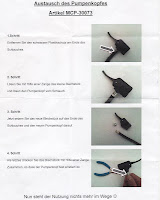 In German.
Thanks Google translate.
They say: STEP 1 Remove the black plastic cover at the end of the hose
STEP 2 Solve using pliers and loosen the little metal piece the pump head from the hose
STEP 3 Now set the new sheet metal piece on the end of the hose cal and the new head on it
STEP 4 Than last press the sheet metal piece with pliers together, so that the pump head is hard.
However, how one removes a pressure crimped securing ring (the "little metal piece") I do not know so at Step 2 I cut the old pump head off with a sharp kitchen knife.
The new one is fitted and works perfectly.
RESULT! The footnote says "Nun steht der Nutzung nichts mehr im Wege :)"
"Now the use of nothing more stands in the way :)"
Posted by eeyore at 15:20