During our "water run" on Friday (See "Boring Routine" post below) we had to do a bit of manoevering around the remains of a willow bough that Canal & River Trust personnel were removing from the canal near our local turning point. The bough had dropped from a seemingly healthy willow in Spice Ball Park.

It made me think about these trees. 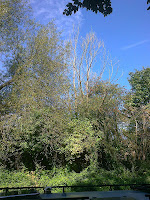 These are directly opposite our mooring. I spoke to the CaRT man with the chainsaw who advised me that they can do nothing about these until they fall because they are on private land. He thought the land might be owned by Hanson Trust. "Not just three men in an office somewhere", he said, "they will have agents working for agents."

Little hope of telling them my worries then!