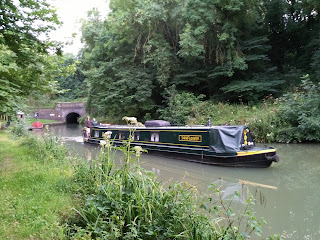 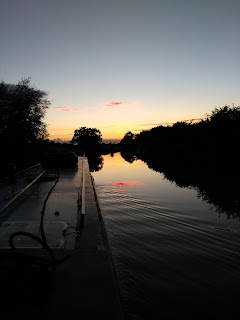 Sonflower heads away from the mooring at Blisworth Tunnel North Portal later than we had wanted and I headed back to the car to move it to the BW car park at Gayton. Here the car park was nearly full and I was glad to have a tree saw in the back of the car. Well you do don't you? After pruning a low hanging oak branch I had a space. I went down to the canal and boarded the boat as she passed.

We boated well into dusk after a beautiful sunset.

The next morning we discovered that we were short of some medication that The Best Mate needed. There was a reserve in the car.  I cycled back to the car park, finished pruning the tree and then rendezvoused with Sonflower at Skew Bridge. I arrived at the tow path just as the bow entered the bridge hole: perfect timing.

Alex and The Best Mate continued while I moved the car to a layby on the A5 just near the New Inn at Buckby.  Cars are considerably faster than narrowboats so I filled in the time to lunch time with a bit if Waterways Chaplaincy. My colleagues who usually walk the Buckby Flight are on the South Oxford Canal so here was an opportunity for them to cover our patch while I covered theirs!

After lunch at the bottom we ascended the Buckby Flight without company. At the top we looked for a mooring and found none. There were none at the start of the Leicester Arm so another decision was needed. We decided to progress toward the Braunston tunnel but here the tow path was cordoned off with red plastic fencing or we could not get near  to the bank because of shallows. I disembarked just before the tunnel and cycled back to the car leaving Alex to steer the boat through the tunnel. I agreed to meet the boat again at the Top lock.

In fact they were at the second lock when I caught up with them. I had looked at the moorings in Braunston and found that the only way to moor before the jucnction would be by asking a boat to move. nb Dreamcatcher were amenable. I then cycled to meet Sonflower and we worked down the locks and moved past the marina, Gongoozlers Cafe, Stop House and under Bridge 91 to where nb Dreamcatcher moved along and we moored fo the night.

Quite tired we went to The Admiral Nelson for a well earned meal. AS we left wenoticed the mooring is only 48hrs April to September. Blah humbug!

Today I moved Sonflower onto the North Section of the Oxford Canal and, because all 14 day moorings in Braunston were full moored up at Navigation Bridge 85, the first bridge with road access after the A45. After fixing the swan hatch lining with "no more nails" (remember ti falling off a few weeks ago) the boat was secure to leave again and I cycled back to Braunston to return to Banbury.