A lovely drive in the sunshine started today's boat move. Driving, top down, is a pleasure in a BMW Z3 at any time and on the warmest day of the year it was beautiful.

At the boat, I left Alex in command and he set off northward with a litre of orange juice, a packet of tortilla chips and a doughnut. What more is needed? Oh, yes, a bottle of sunscreen and a bottle of aftersun lotion as well!

I got back in the Z3 and drove north too. I stopped at Bridge 72 (Moors Lane) and chatted to a lovely retired GPO engineer who was heading south. As SONFLOWER was not in sight I phined Alex and found he was still about an hour away. I went to park in St John the Baptist Church car park. This is a favourite parking spot for dog walkers and walkers. There is an overnight parking prohibition which is unfortunate. I looked round the lovely church before  I headed off along the towpath, up the locks, assisting boaters as I went. At the middle locks I stopped to sketch the top locks. 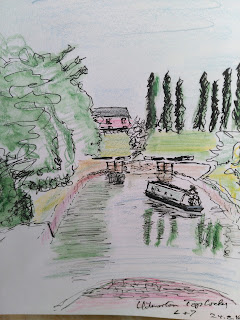 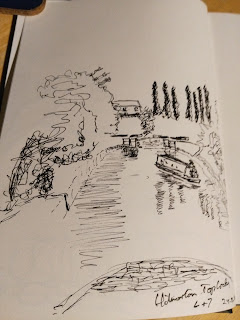 I haven't sketched for a while so it was a little daunting but did not turn out too bad. Unfortunately I had to go straight in with ink as I could not find my pencil box. (Addition of a little coloured pencil 'in the studio') 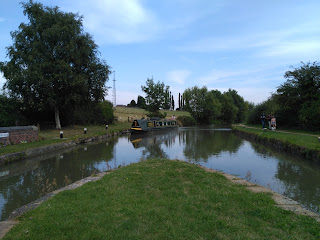 As I arrived at the top lock so did SONFLOWER. So one out and one in and it was the same all the way down. A good road as they say. 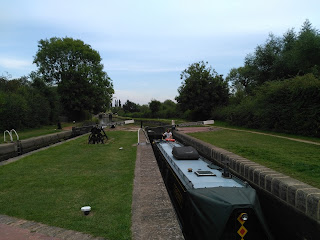 We moored on the 14 day mooring. Not quite hard to the bank because the sides are shallow and, of course, the rings do not suit our length so we have one mooring pin.

There are a lot of boats on the move at the moment. Some moving faster than others. Alex, was intimidated by a bat right on his tail on the Barby Straight when he was travalling at 1800rpm, equivalent to about 3mph. He pulled over and let him past. But why do we have to do this? Ten years ago 3mph was considered a reasonable cruising speed. On the Oxford we make wash at anything faster! As did this boat as it sped away into the distance!