Having returned to Banbury for our WWC Commissioning at Cropredy yesterday we returned to the boat on the quasi 48hr mooring at Galleon Bridge in case it was not a 14 day one!

First a conversation with Tom, a angler who would have liked to be boating to Birmingham to get near a sister who he was in contact with after 40 years but his gearbox had broken down. He just needed to tell his story!

Then we joined nb Dire Straits in Cosgrove lock. In their honour Alex played "Money for Nothing!" and other tracks from Brothers in Arms while in the lock. Here we unloaded the folding bike and I peddled back the way we had come to get the car from the Ouse Valley Country Park car park and drive to Blisworth. The Best Mate and Alex cruised the lock free pound while I drove, aided by the satnav "Sheila", toward the Tunnel Hill Riding Stables. Just past here I found a small but neatly hidden car park and a path down to the North Portal of the Blisworth tunnel. I walked down and checked out the spot and was pleased to find rings and a piled landing stage with no signed mooring restriction. An orange ball bounced past me into the canal and a lady with a beagle followed close behind. As she fished for the ball she dropped her extending dog lead in the canal. "No problem" I said and returned to the car for a magnet to fish for the lead and a pole to help retrieve the ball. Unfortunately no amount of magnetic fishing could latch onto the steel clip which was the only bit of steel on the lead and reel. I returned up to the car to give her a piece of rope that I keep in the car for coralling loose horses and she used that as a lead to get her beagle and ball back to the car. I felt such a failure!

I then rode over the Tunnel Hill and down into Stoke Bruerne to meet SONFLOWER and crew at the services below the locks. We worked up the locks just ahead of FMC Motty Boat "Owl" (1928), with a 1951 Kelvin Engine, and her Butty boat "Hampton"(1912). Their advance party of a female crew member with two life jacketed dogs helped us through and reset the lock in their favour. We stopped for lunch in the long pound between Locks 15 and 14 and they passed, chugfully.

After the last two locks the flight we continued to enter the wet and dark  Blisworth Tunnel and came out to our mooring. I tried to find the lead with the sea searcher: no luck again. Here Alex celebrates as the Best Mate sizes up the climb to the car park. As we left, it started to rain. 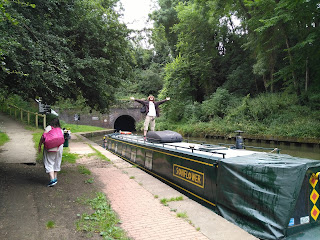