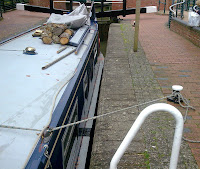 I went to congratulate this boater on being the first one I have seen using the bollards installed at the side of Banbury lock. As you can see the boat is tied on and the centre rope is tightening as the boat rises in the lock.

The boater was single handed but told me he usually ties to the ladder but the ladder on this lock is in the wrong place!

By the way, he managed to untie the boat just before it tilted. A dangerous practice however, to my mind. A delay on getting the paddles open or some other distraction and disaster could strike.

This is an accident waiting to happen.
Posted by eeyore at 15:50