The Reason Why part 2 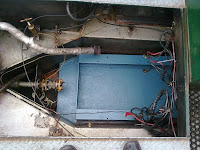 I haven't been blogging for a while because there has been litle to say. Here is the reason why. My engine bay is looking very clean and has a newly painted engine oily bilge but no engine. The engine is away for an overhaul at CB Marine at Calcutt Marina. The heart of the boat is missing!

Obviously, the time is now to have a spring clean of the engine bay to remove the oil film that has acumulated over the years of oil seal leakage. Matt (the boss) at Tooleys collared me yesterday to talk about 'three things' (i)agree that the only thing to do with the engine bay is to treat it with a rust preventor and paint it with hammerite or similar to keep it so. (ii)agree that the leaks on the deisel tank shut off valves needed to be fixed. The universally applicable Murphy's law ensures that the leaks are tank side of the valve and require the almost full tanks to be drained! (iii) agree an alternative site for the engine air intake vent (required by the out of water survey to prevent rain ingress into the bilges) somewhere other than in the control column where I wanted it.

How is it that every visit to the boatyard ends with another thing to pay for?
Posted by eeyore at 14:38