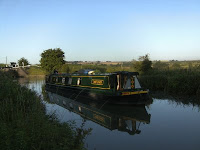 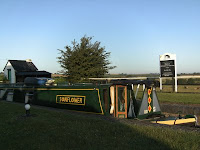 We rose early and set off down the 17 locks to Northampton. We were in no hurry but enjoyed the fact that the locks were set in our favour until the fifth. The pound between lock 4 and 5 was also extremely low. Where does the water go? We crossed with nb Cygnet in the ound between lock 9 and 10. This is a 27 ft craft which is 'just perfect for a man and a dog!' In site its small length he still didn't fit into the lock sideways although he seemed intent on trying!. We stopped at lock eleven for breakfast and nb Marsh Harrier caught us up.

At lock 12 we encountered two obstacles. There was a 45ft multicouloured (with no name or visible license) narrowboat in the lock exit and an angler on the lock mooring. Looking at the characters on the narrowboat, their two alsations and another dog, I thought it easier to move the angler on the lock mooring. The boaters had stopped to chop some wood and for one of them to pop to the shop! When he returned they got on the boat and threw the three dogs on to the towpath. The last to be thrown was a lovely dauberman but by now the boat was more than a dogs throw from the towpath and the poor animal landed with two paws on the lock wall and the rest of his body slammed against it, he struggled on to the path. "Just letting them run, are you?" I asked. I cannot repeat the reply. These three men on a boat didn't deserve the dogs they had. They left a machete and some wood they had been chopping on the lockside.

The remainder of the cruise was weedy but the clear water gave excellent views of the many fishes. We reached the River Nene at about 11 am. We moored with Marsh Harrier at Morrison's, went shopping and had lunch then moved forward to use the excellent facilities at Beckett's Park. Pumped put and refreshed with water we moored on the new moorings at Midsummer Meadow with BCF members on Hotel Boats nb Oak and nb Ash, who awaited guests.

I went for a long walk around the Battlefield of the Battle of Northampton (1460) which is now a nature reserve, with Piglet, a telescope and binoculars. Tigger played football in the park and the Best Mate crocheted in a deck chair.

A nice relaxing day with more than our fair share of sunshine!
Posted by eeyore at 16:55