To Moor or Not to Moor

Today has been one of the most relaxed so far.

First we set off early to get through Lower Wellingborough Lock before the apocryphal fun seeking youngsters had got up.

Then we cruised a bit, impeding a boatload of student types by mooring on the lock landing at Higham Lock. Well not on it, more half on and half off it as the last thing I wanted to do was impede anybody. The problem is that there is realy nowhere else to moor. The banks are all steep and reedy and the river bends and twists in millenial loops as it makes its way northeastward. The sign at the lock moorings says "NO OVERNIGHT MOORING" so we figured it was OK to moor for a little while to take some exercise around the beautiful ex-gravel workings. Obviously, in such circumstances or any other come to that, we would not mind someone mooring alongside to drop off crew or even tie up securely. I imagine that most river users would expect to. Some of the landings are so short that two boats working tthe locks together would have to do so.

The student types then impeded themselves by dropping a windlass in the lock with the consequential magnet fishing procedure. Why does the windlass always seem to fall under the boat making it necessary to move the boat out of the way forst? Murphy's Law of Boating No - ?

We were then in the way of the two boats from March that were moored in Wellingborough yesterday. We met them later at Rushden and Diamonds facilities and they said that they had actually just made a pigs ear of landing to collect crew. There really was enough room. They agreed they could have come alongside but 'didn't like to ask'. We were glad to find that water and pump out are still available even though the signage has been altered by the application of blue stick tape over the syblols. As warned by nb No Problem, other facilities on Nene park are very much closed and signs have been posted to indicate that it is private property. Our Nene cruising guide says that arrangements have been made for bopaters to use the sports hall facilities. It didn't appear that this arrangement is any longer in force.

We haven't far to go now so we moved a little down the 48 hour mooring and settled in. There are more lakes to explore and the scenery needs to be sketched and painted. Such is a holiday! Here is a viwew form the boat, looking away from the R & D football complex. 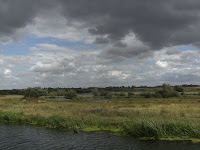