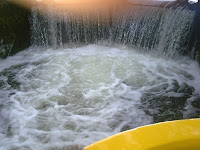 "Hi! How's the cruise going?" we are asked. This is a River Nene lock from the inside. It's great.

Everybody we have met so far has told us not to moor in Wellingborough.

Here we are, on the park and moored with two boats from March (Middle level) and Ebony which, I beieve, is from the S Oxford like us. Ebony is all locked up but I have spoken to the boaters from March who have moored here on many occasions without trouble. There are few moorings out in the country so I have decided to stay here and leave early in the morning.

We had a good day today. After the intitial rain this morning during which we went to Northampton to purchase a tripod for Piglets's telescope. Eeyore of course is free on the bus. However, this morning it took Piglet longer than it should to get ready and we missed the only bus from Cogenhoe this morning! Fortunately we had asked a gent where the bus stop was and he returned to find us still standing at it. He gave us a lift right to within 100 yards of the shop we wanted in his jag. Awesome arrangement! On return (by bus) we noticed that a boat was going through the lock. We told them to leave the gates open and we set off down river. We had an uneventful cruise. We only met two boats. One was Lee, our friendly Boat Safety Examiner and the other reset for us the lock from which they had just departed. What a fantastic arranger we have!

We stopped for lunch just as the thunderstorm hit 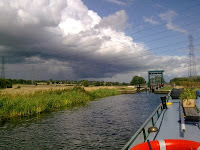 and later moored up to let another dark cloud pass. The rest of the day was blue sky and bright sunshine.

So on to Wellingborough. We planned to go through the lock and into the country because of the doom and gloom that we have heard about. However, I think it is rather like what we hear about our home town of Banbury. Apparently one shouldn't moor there either. But with CCTV surveillance, lighting, good facilities and care (just make sure the mooring lines cannot be quickly removed from the bollard: a 'fun' prank) it is as safe as anywhere.