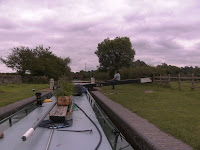 YES! WE ARE ON OUR WAY. Today we start our Summer cruise. But it has already had its problems.

Firstly, Piglet did not wake at his usual 6am this morning. This is so unusual that we were quite concerned. He did have a long day at Alton Towers yesterday and queued for over 3 hours for one ride but this did not explain everything. He ate half his breakfast, again unusual, and then really didn't want to get going. Suddenly, our most enthusiastic lock labourer was not enthusiastic about anything!

Secondly,it rained. This morning, in fact, it poured. Those last minute jobs were now easily achieved because there was no way we were going anywhere in the proverbial torrential.

At about 1.00pm the rain eased and them stopped. We were now fed up with watching boats making a real hash of passing us on our home mooring so we headed off. When I say headed off, this in fact was aft first as we needed to back to the winding hole about 200 yards up the mooring(past ten boats). This procedure would have been excellently carried out, if I may say so myself, had two boats coming toward Banbury not got in the way. We achieved the turn and headed north.

Lunch was a sandwich on the move and we made up a lot of lost time. There were few boats on the move and until we came to Claydon Flight, where there was a queue to come down, there were few locks set in our favour. Not a lot of people to chat to today. We made top level at about 6 pm and proceeded on toward Fenny Compton. Here the heavens opened and the umbrella was put into full use. The moorings were full so we went past and moored just beyond bridge 134.

Dinner was served, Piglet cheered up and we witnessed a beautiful sunny sunset.

The picture shows the Best Mate relaxing for the first time in ages.