This is becoming a foodie blog instead of a boater blog!

Don't worry, we are provisioning and preparing the boat for our Summer Cruise which starts next Saturday.

. . . we have been to the English Heritage Festival of History. Driving there was almost a canal tour in itself, via Wilton Locks, Watford (locks), a stone's throw from Foxton to Kelmarsh Hall in Leicestershire where the event happened. We overnight stopped in Market Harborough (on the GU(Leicester Line))

The weekend was great. Reconstructions of every period in British History from the Romans to D-day. Gladiators, jousting, Civil War battles and a dogfight between Spitfire and ME109s. Not all about warfare either with people modelling the settlements of the time and even cooking the menus of the periods.

Here is a poached pheasant and rabbit stew off the Duke of Goucester's estate in about 1480! Don't tell his Grace! 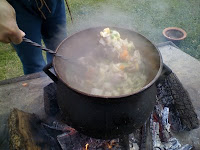