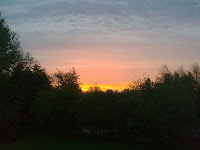 We atarted today with a wonderful dawn. Sunrise was spectacular. Red sky in the morning shepherd's warning! But not today. It was glorious.

My crew arrived on time at 0900h and we slipped the mooring, saying goodbye to NB SKYY who is set to go south, and headed north. As we passed the Grimsbury Arm I phoned Steve Haywood of NB Justice to see if he wanted to join us as he is headed for the Canalway Cavalcade, but got his answerphone. I left a message.

We had a lovely time. A chat with Chris and Vic on NB Auriga in Cropredy. Vic was runbbing down his boat with baby oil to try to emulate SONFLOWER's shine. He hasn't got a hope without a repaint!

At Cropredy lock we met with a mother and daughter who were towpath walking. They expected to get to Claydon today. They helped my crew, pictured above at several locks on the way before we lost them taking a well earned coffee break. They walk the towpaths every Thursday and hope to cover the whole of the Oxford Canal from Oxford to Coventry in stages in this manner. They had a great day for it today.

At Claydon flight we met a couple who often come to sit on the bench by the locks here. They can no longer boat as the wife has Parkinson's desease but they obviously love the canals. They had a boat in Fenny Compton marina for a long time and miss it terribly. I hope that I never have to leave SONFLOWER.

We continued past our planned destination, The Wharf and moored near Stoneton Bridge in an idylic setting with lambs gamboling around. We hope that the sunrise tommorrow brings as much joy as today's.
Posted by eeyore at 20:16