Here is a picture of SONFLOWER high and dry in Tooley's yard. They have removed all the windows now and every removable fitting. Beneath most of them was the inevitable rust from 25 years of life on the water. Going back to bare metal is what a good paint job is about when there is rust in the steel and that is what has been promised. So far, so good. 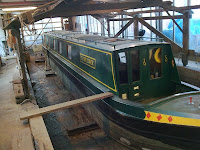 In the last post I said there is always something more to do. I have added a couple if things to Tooley's list. One thing they added to mine was what to do with the cruiser stern? The previous owner had dogs and had a fence around the back. Tooley's found this to be rust ridden and did not want to put it back or repaint it. 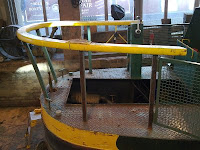 We have children and grandchildren and do not want to worry about them slipping off the rear deck! We have agreed to to replace the mesh with steel bars. I will keep you up to date with what it turns out like.

There were another couple of boring things to do like replace the swan-neck bearing and re-dress the lower rudder post bearing cup because it was worn.

The anodes are good though!
Posted by eeyore at 17:56

I do like Tooleys - my first choice of place to go to for work. They were even kind enough to remove the cat food after I told them I had accidently left our moggie's food bowl out!